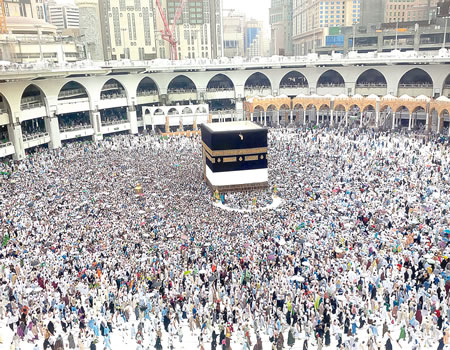 The Hajj is a journey full of symbolism, for it represents the soul’s journey towards God. Each stage and each aspect of the pilgrimage is replete with profound meanings about life, worship and realities of faith, especially the love and awe of God.

There are only two lunar months between the end of Ramadan, the month of fasting and of the Qur’an, and the beginning of Dhul-Hijjah, literally the “month of the Hajj.” This means that the two Eids or annual festivals of Islam, which are associated with Ramadan and the Hajj, occur within a quarter of the year, leaving over nine months without a major festival. Imam Ibn Taymiyyah observed that God thus invites His guests for the Hajj immediately after they have been purified and cleansed by the magnificent month of fasting, prayers, charity, discipline and the inner struggle that is Ramadan. Only the purest souls truly make the journey to the house and presence of God.

The state of Ihram

The state of Ihram, which takes its name from the same root as haram, indicates a state of sacredness when many otherwise-halal matters are temporarily prohibited. It is a preparation for visiting the Sacred Mosque in Mecca. Imam Ghazzali stated that the Ka’bah is so holy and beloved to God that a vast area of land around it is made sacred, such that we cannot hunt prey or even cut down a tree in the haram area.

Furthermore, even visiting the Ka’bah requires that we assume the sacred state of Ihram with restrictions on dress, perfume and marital relations imposed during this time. All of this serves as a reminder that in the neighbourhood and precincts of the House of God, we must be in a heightened state of spiritual awareness. The prohibition on covering the head for males and on veiling the face for females during Ihram is to instil a sense of humility before God; these practices at other times remind us of the importance of being dignified before God, for humanity shoulders a responsibility that even the heavens and the earth with its towering mountains declined (Qur’an, Surah al-Ahzab (33:72).

The actual dress worn in Ihram by men, two unstitched sheets of cloth, is the same as the Muslim shroud – the clothing of the deceased who has continued his journey beyond this world and into higher realities of the Hereafter. In Ihram therefore, our clothing immediately reminds us of the fragility of our life in this world.

This was the first place of worship to God built by Man on earth, “blessed and a source of guidance for the worlds” (Qur’an, Surah Al-‘Imran, 3:96). This is why some authorities hold that it was the first man on earth, Prophet Adam, who originally built the Ka’bah, with the Friend of God, Prophet Abraham, rebuilding it many centuries later. The Ka’bah is the archetypal House of God on earth, just as there is a House of God, called the “Oft-Visited House” (Qur’an, Surah al-Tur 52:4) in every one of the seven heavens, where the inhabitants of each heaven, such as the angels, worship.

The Ka’bah is covered by a lovingly-manufactured cloth, the Kiswah, that is renewed and replaced each year after the Ka’bah is washed. The washing and covering of the Ka’bah reminds us of the act of washing and wearing our best clothes when going to the mosque, especially for Friday and Eid prayers. Washing (wudu’ or ghusl) is of course a symbol of purifying the heart of its spiritual diseases such as associating partners with God, greed, selfishness and envy.

This act of worship reminds us of the angels’ tawaf around the “Oft-Visited House” and around the Throne of God, whilst they glorify and praise their Lord. The Prophet (peace be upon him) said that tawaf was like salah, except that we are allowed to talk during tawaf. Any prayer, du’a or phrase of dhikr is allowed during tawaf, as is the recitation of the Qur’an and even conversations involving the seeking of knowledge.

In fact, the legal authorities agree that the tawaf is allowed even in silence because the limbs of the body still complete their worship in walking around the Ka’bah seven times. Sometimes the tawaf, especially the Tawaf al-Ifadah during the Hajj, can be in a state of such great tiredness that even completing it in silent remembrance is a great achievement! The Ka’bah is a magnificent sight, especially with the throngs of pilgrims circum-ambulating it, a scene that has universal resonance since it reminds us of the orbits of the planets around the sun, the moon around our earth, the solar system around the centre of the Milky Way and many other examples from the physical world. Above all, it reminds us that every aspect of our lives revolves around the Most Merciful.

The two rak’at after Tawaf

Every set of seven circuits of the Ka’bah (tawaf) is followed by a two-rak’at prayer, in which the sunnah of the Prophet is to recite Surah al-Kafirun and Surah al-Ikhlas in the respective rak’at. These two surahs are the same ones that he would often recite in the sunnah prayers before the dawn prayer, after the sunset prayer and during the “odd” (witr) three-rak’at at the end of voluntary night prayers. The significance of reciting this pair of surahs is that the first represents a rejection of whatever is worshipped besides God while the second affirms the Absolute Purity of the Oneness of God.

Walking and running in life

Running or jogging during the first three circuits of tawaf was a practice of the Prophet and his companions that is still continued until today, although the Hanafis hold that it was only a temporary sunnah conditioned by its original circumstances: to demonstrate the falsity of the claim of the pagans of Mecca that the Muslim pilgrims were exhausted by their worship and long journey from Madinah. We also jog or run during the Sa’i, the seven trips between the hills Safa and Marwah that commemorate Hagar’s thirsty search for water, quenched by the gushing forth of the spring of Zamzam at the feet of her infant son, the Prophet Ishmael.

The combination of walking and running around the Ka’bah and between the hills of Safa and Marwah remind us that some of our duties and struggles in life are done at a steady pace while others are carried out with extra effort and urgency. Above all, the hills of Safa and Marwah are among the “symbols of God,” (Qur’an, Surah al-Baqarah, 2:158) as are the sacrificial animals of the Hajj and Eid al-Adha; and “whoever reveres the symbols of God, such reverence is from the piety of the hearts.” (Qur’an, Surah al-Hajj, 22:32). The latter verse of the Qur’an is a powerful reminder that our hearts must be imbued with a “sense of the sacred,” a quality that is in short supply in an increasingly godless and materialistic age.

On the eighth day of Dhul-Hijjah, the pilgrims proceed to Mina, a plain just outside Mecca to encamp and spend the night in preparation for the great Day of ‘Arafah the following morning. For Ibn al-Qayyim, even the tent is symbolic, for as he says in his Qasidah Mimiyyah, “My heart is encamped in Your eternal plains!” That is, the human heart is sheltered within the confines of the Sacred Law, which help to protect it against all the perils in existence.

On the ninth day of Dhul-Hijjah, the pilgrims proceed to ‘Arafah to spend the day in earnest prayer, beseeching God to shower His Mercy and Forgiveness upon them. This day is so important that the Prophet said, “The Hajj is ‘Arafah.” He also compared the visual appearance of the Day of Judgment to that of ‘Arafah: a vast plain with millions of human beings, all clad in shrouds, in need of the Divine Mercy.

After sunset in ‘Arafah, the pilgrims return to Mina via Muzdalifah, where they spend the night before continuing their journey after the dawn prayer. The word, Muzdalifah means a place that, or a soul who, “has come near,” and so we are reminded again that we are always close to God. Back in Mina, the pilgrims spend up to four more days in prayer, with the added acts of worship: sacrificing animals for God, trimming or shaving the hair of the head and of “stoning the devil.” They also return briefly to Mecca for the “Visit Tawaf” and finally the “Farewell Tawaf.” The sacrifice commemorates the willingness of the Friend of God, Prophet Ibrahim, and his son the Prophet Isma’il, to submit lovingly to the will of their Beloved, even if this involved a huge sacrifice: of a firstborn son’s life in one case, and of one’s own life in another case. The sacrifice is a reminder that we must be prepared to sacrifice our own time, wealth and even lives in the struggle for justice and truth, both of which are names of God. Shaving the head reminds us that a true Hajj leads to the pilgrim returning like a newborn baby, as the Prophet taught –this is the Islamic understanding of being “born-again,” for newborn babies also have their heads shaved. The “stoning of the devil” ritual that involves the stoning of three pillars of different sizes traditionally mmemorate Ibrahim’s defeat of Satan’s temptation which occurred at three different places on his way from Makkah to Mina to sacrifice his son, a sacrifice that was replaced by that of a ram once the sincerity of both Ibrahim and Isma’il was manifested.

The pillars of different sizes represent the fact that some diabolical temptations are stronger than others. The stoning ritual is carried out a total of 10 times, each with seven medium-sized pebbles: the Prophet emphasised moderation even in the size of pebbles selected. A total of 70 pebbles are thus used to symbolically stone the devil, the throwing of each pebble being accompanied with the expression, Allahu Akbar! (“God is the Greatest!”) This is one of the most powerful and poignant expressions of takbir during the Hajj experience.

Although not a legally-essential part of the Hajj, the spiritual trip is not complete without a visit to Madinah and the Prophet’s mosque, giving the pilgrims the wonderful opportunity to greet their beloved leader, prophet and messenger. A common Islamic saying has it that, “Makkah is Majesty; Madinah is Beauty.” The Jalal vs. Jamal duality of the Divine Names (the “Tao of Islam”) is here manifested in the awesome, mountainous nature of Makkah and the serene and peaceful nature of Madinah. Overall, the unified and holistic Hajj experience is a reflection of our journey upon the path to the One God in all His Unity.