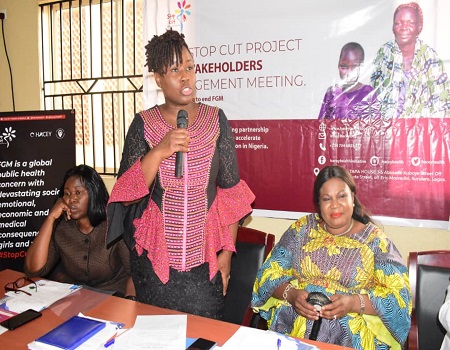 Foremost non-government organisation, HACEY Health Initiative has partnered with the Ekiti State Government in a bid to put an end to Female Genital Mutilation (FGM) in Nigeria.

The partnership is in line with the Stop Cut project aimed at reducing the prevalence of female genital mutilation/cutting in Nigeria by improving the enforcement of protective laws and increasing public knowledge and positive behavioral change among communities and stakeholders.

The project is funded by The UN Trust Fund to End Violence against Women (UN Trust Fund) is being implemented in Oyo, Osun and Ekiti states, which have the highest prevalence of FGM in South West Nigeria.

The roundtable meeting which had over 30 people in attendance was held on Monday, March 16 in Ado Ekiti. Some of the participants included the Honourable Commissioner for Health, Dr Mrs Mojisola Yaya-Kolade;  the Permanent Secretary, Ministry of Health, Dr Mrs Folake Olowojobi;  the Permanent Secretary, Health Management Board, Dr Williams Afolabi amongst other people.

In a bid to aid the Stop-Cut Project, the stakeholders shared some of their experiences regarding issues relating to Female Genital Mutilation (FGM) and how they can contribute to achieving the objectives of the project.

The representatives of the Nigeria Police Force (NPF), Ekiti State Criminal Investigation and Intelligence Department (SCIID), Mrs Aderonke Olaimuyi and the Nigeria Security and Civil Defense Corp (NSCDC), Folukemi Jacobs both emphasized the need to create awareness about the negative impact of FGM in the rural areas of the state. They explained that despite the fact there has been no report of FGM so far, the security agencies are always ready to persecute offenders once they are reported.

Dr Mrs Folake Olowojobi requested that the Ministry of Justice should sensitize the police force on the provision of the law so that prosecution can be done according to the law. She also said the state would emulate the processes put in place in Osun State as it concerns reporting of FGM to designated authorities.

The State Secretary of the International Federation of Women Lawyers (FIDA), Ms Blessing Ajileye said that the body is yet to receive complaints regarding FGM. She added that it was because people do not see it as a problem. Other stakeholders present also emphasized the need to sensitize rural dwellers about the negative impact of FGM, especially in the local dialect to aid their understanding of what FGM means and the reason it should be stopped.

The Director of the Ministry of Women Affairs, Mrs Tayo Olatilu said: “The practice of FGM in Ekiti State is unique because it is practiced on infants from eight days to two months at maximum and as such people do not report themselves as it is a family issue not exposed to others. The ministry will intensify effort on sensitization and also establish FGM champions at the grassroots level.”

She added that circumcisers will be empowered in order to ensure that they quit the practice of mutilation and they will be monitored so that they do not go back to the work.

Others in attendance including the representatives of the Nigeria Association of Nurses and Midwives (NANM), Mr Comarade Fatomulugi; the Primary Health Care Development Agency (PHCDA), Pharm. Olabisi Arogundade; the Hospital Management Board (HMB), Dr Williams Afolabi; explained that the registrars and relevant members of staff will be informed in order to curb the evil act. It was also said that anyone found disregarding the laws will be made to face legal consequences.

The Director on gender matters at the Ministry of Education, Mrs. Alokan, noted that though there has been no report from schools so far, the Ministry would work with HACEY to introduce clubs in schools, incorporate FGM into curriculum at both primary and secondary school level.”

Others at the event including representatives of the Nigeria Association of Women Journalist (NAWOJ), Ms Bimbo Yusuf; National Orientation Agency (NOA), Mrs Oluwatoyosi Eleyinmi and National Human Right Commission (NHRC), Mrs Ayomide Adeshina harped on the need to carry out sensitization of community dwellers in order to bridge the information gap in that part of the society.

It was also agreed that the media will be used to disseminate information about FGM in order to create more awareness in the state.

The team also visited the House of Assembly to inform them lawmakers about the Stop Cut. The leadership of the House promised to support the project by reviewing the existing policy and promoting the laws of the state.

The Lagos State Government has announced four new cases of coronavirus bringing the total number of confirmed cases in the state to nine. The state Commissioner for Health, Prof Akin Abayomi at a press conference held today also announced that the first test of the index case came back negative… Read full story

The High Court in Akure, Ondo State capital, on Monday, filled to the brim, as the court resumed the trial of the founder of Sotitobire Miracle Centre, Prophet Alfa Babatunde, and six members of the church over the disappearance of a one year toddler, Gold Kolawole, during Church service, last November… Read full story

COVID-19: UCH asks staff over 60 years of age to work from home

2023: The PDP Challenge To The APC In South-West

IT is an indubitable fact that the Peoples Democratic Party (PDP), at the height of its glory, dominated the political landscape since the advent of the current democratic dispensation, especially between 1999 and 2011. Its sphere of, though gradually waning particularly in the South-West and some parts… Read full story