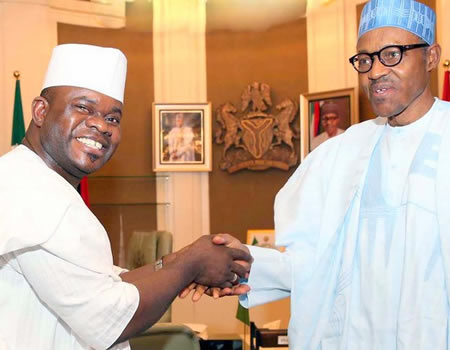 Kogi State Governor, Alhaji Yahaya Bello has called on citizens across the nation to continually support the administration of President Muhammadu Buhari noting that he was doing his best to proffer solutions to the challenges the country is facing.

Governor Bello made this known on Saturday while receiving a delegation of the Arewa Youth Forum (AYF) who paid a courtesy visit to the governor and made known their intentions for the governor to run for president in 2023.

He added that the discuss and the events of the 2023 election were for the almighty to decide adding that there must be a country before the talk of leadership in 2023 would be appropriate.

Governor Bello noted that one of the platforms which the president has created was him leading the way in the creation of the All Progressive Congress (APC), adding that in recent times the president was also calling in Nigerians particularly the youths to revalidate and register as members of the APC.

He added that his responsibility as the Chairman of this committee was not limited to any individual as the APC platform was made open for every individual to add their own quota while some new entrants would be refined to learn the party’s modules of operations.

The Governor opined that despite the numerous challenges which his administration faced at inception, it has in five years changed the story of the state stating that unity and integration, infrastructure, boosting security, institutional reforms and other areas were some of its antecedents owing to its honesty, resilience and tenacity in right doing.

In his remarks, the President General of the Arewa Youth Forum, Comrade Gambo ibrahim Gunjungu expressed that the group after its research has come to the conclusion to make the call on the Governor to run for President in 2023.

He noted that the AYF were proud of the governor’s antecedents in Security, Infrastructure, youth and women inclusion in governance and also his firmness against the politicization of the Covid-19 pandemic hence their call on him.

The President General asserted that they are just like many other young Nigerians who wanted to change the political band wagon of recycled politicians and were looking up to him as the hope of Nigerian youths adding that they were discussing with their patrons and already had the network it takes to propagate their message.