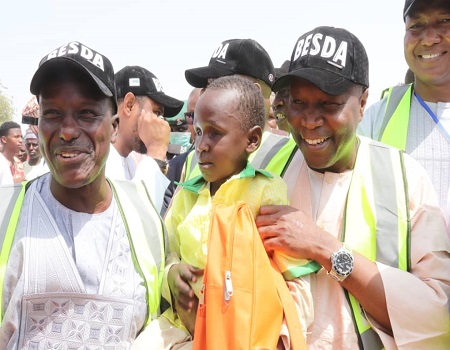 A total of 400 schools have either been renovated or constructed by the Gombe State Government just as the State Governor, Muhammad Inuwa Yahaya, has undertaken to sponsor the education of visually impaired pupils in the state.

The governor has also flagged off the distribution of school uniforms and bags containing writing materials to pupils in public schools and girl-child learning centres across the state.

While performing the exercise in Jalingo Primary School, Furnakaye Local Government Area, the governor said that the distribution of the materials demonstrates his administration’s commitment to improving the quality of education in the state through the provision of instructional materials and basic support to pupils in various public schools across the state.

Inuwa Yahaya also expressed the hope that the gesture will help increase enrolment level and enhance the quality of teaching and learning in public schools with a view to producing pupils who will go on to excel in higher stages of life in the future.

He, however, lamented that over the years Gombe State used to be ranked among the poorly performed states in national examinations, as such his government saw the need to change the narrative through sound education policies.

The governor added that his administration met an education system that was ravaged by inadequate and decayed infrastructure, a large number of out-of-school children and a teaching workforce that is poorly trained and motivated.

He also said that through concerted efforts, the state government declared a state of emergency in the sector and deployed a broad-based approach to deal with the educational challenges in the state.

He further said that government took necessary actions to improve basic literacy level by venturing into the Federal Government/ World Bank project of Better Education Service Delivery for All (BESDA) to ensure the mopping up of out of school children and returning them back to formal learning centres.

“Among other steps taken was conversion and renovation of the dilapidated and abandoned almajiri school in Kwami into a teacher training centre to serve as a capacity-building citadel for teachers in the state,” the governor added.

Inuwa Yahaya then lauded the concerted efforts by BESDA and SUBEB as well as development partners such as USAID and UNICEF for supporting the state towards revamping the standard of education in the state through training and retraining of teachers.

He declared that “Other areas of focus in improving education in the state is the renovation of schools across the state to ensure that a conducive atmosphere of learning is put in place for pupils and teachers.”

He added that from September 2019-March 2020 Gombe State government through BESDA project was able to enrol over 200,000 out-of-school children, ranging from almajiri/tsangaya school category to girl-child education.

The governor who urged traditional leaders and parents to support the government in the sensitisation and mobilisation, also charged the SUBEB and BESDA officials to be fair and transparent in distributing the materials.

He told the gathering that his administration is committed to free sponsorship of all wards with a disability, pledging to personally sponsor an Eight-year-old visually impaired pupil, Muhammad Ahmad, who was at the occasion with the help of a guide.

He said that he will personally fund from his pocket, the educational expenses of the boy from primary to any level he aspires to attain.

Commissioner of Education, Dr Habu Dahiru, assured the gathering that state ministry of education will continue to ensure the statutory mandate of the ministry of promoting quality educational policies is sustained.

He noted that the ministry closely supports and monitors the basic education projects to ensure the project becomes a success.

The Commissioner commended Governor Inuwa Yahaya for re-introducing the mock examination which he said will henceforth be used as a yardstick of students’ sponsorship in WAEC/NECO.

Habu Dahiru expressed optimism that the restored policy will make an impact on students performance in the senior school certificate examinations.

In his welcome address, the BESDA state Coordinator, Dr Abdullahi Bappah Garkuwa, lauded educational initiatives of Governor Yahaya administration and commitment of other development partners for supporting BESDA project, attributing the successes recorded by the project in the state to Governor Yahaya’s positive disposition.

Chairman of State Universal Basic Education Board, Hon Babaji Babadidi, attributed the menace of out of school children to poverty, socio-economic, cultural benefits and security challenges, applauding Governor Inuwa Yahaya for taking necessary measures to nip the situation in the bud.

Over 200, 000 pupils are expected to benefit from the free distribution of uniforms and learning materials as contained in a statement by Ismaila Uba Misilli, Senior Special Assistant, Media and Publicity to the governor.