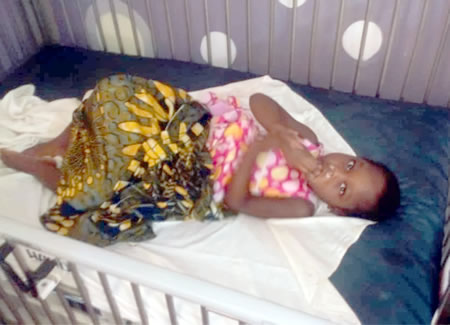 THE family of a three and half years old girl, Samara Ayomide Adewale, have appealed to Nigerians for financial assistance to save the life of their daughter, suffering from  ‘Sensorineural hearing loss’ disease, which has adversely affected her growth like a normal little child.

Ayomide, who is presently on admission at the state’s Specialist Hospital, Akure has been battling with the disease since she was six months old when her parents noticed some changes in her.

Speaking on her child’s condition, Ayomide’s mother, Mrs Edet Adewale, in tears, said that the ailment started when she gave birth to her. She stated that she noticed that Samara’s temperature had gone up and immediately took her to the hospital where she was immunised.

According to her, “After we noticed that she had high temperature, she was taken to the hospital for appropriate care, but we never knew it would get to this extent. We have conducted a lot of tests on her.

“Since then we have been noticing some changes in her; she could not do things the way she was supposed to do them while growing up.  She has not been talking and walking since then, she cannot make use of her hands, she cannot do anything, she is just there. I do everything for her; I carry her wherever I go because I cannot leave her alone at home with my neighbours. After the several medical tests, we were told that she has lost the sense of hearing. We were also told that her inner ear had been affected and so we are expected to carry her conclear implants on her.

“We cannot enroll her in school because of her condition; I want my daughter to live a normal life like other children. I want Ayomide to walk; I want her to play the way normal children do play and this has been a challenge to me and I have been carrying her from one place to other.

“Doctors have given us till August to get the money in order to carry out the surgery on her; they are bringing medical experts from abroad to join them for the surgery. I am calling on good and kindhearted Nigerians to help my child to live, no amount is too small. We have been moving around to pull all resources together without any positive results. Nigerians should please assist me, my little girl and my family because N14million is not within our reach.”

Mr and Mrs Adewale, however, appealed to philanthropists, individuals, organisations and well-meaning Nigerians, religious and charity organisations to come to their rescue by helping the family financially to save the life of their girl.

“We have been managing this situation for the past two years and we have spent all our life savings on the ailment.”

A consultant with specialisation in ear, nose and throat surgery at the state Specialist Hospital, Akure, Dr Akinboun Ambrose, who is treating the little girl, said the cause of the ailment is ‘seizure disorder post-immunisation fever.’

The only way out, according to Dr. Ambrose, is to carry out a surgery on her, saying that she needs ‘Conclear Implants’ which will cost N14 million for Ayomide to recover from the ailment.

According to him, her sickness is two-fold- neurological and autological sides. He added that the neurological side affects her ability to maintain stability, and this is being managed by neurologists at OAUTHC Ile-Ife.

“However, the one that concerns the ear surgeon is the hearing aspect, so she is with us as we prepare her for the ear surgery when the money is ready. Her present state is what we call ‘profer to surgeon’ and there is no way she can hear (verbal) communication. As she is now, she cannot hear conversation as a result of the ailment and that started from the history we got from her parents for the past two years shortly after she had the episode. I learnt that she was given some immunisation which may likely have caused the ailment,” he said.

He argued that it could have been the immunisation that she took which probably affected her hearing.

“Any disease condition that can affect the inner ear like meningitis in children can lead to hearing loss. She can only benefit from ‘conclear implants,” Dr Akinboun said.