For residents and occupiers of Butcher Lane/Dilimi Jos North Local Government Area of Plateau State, the loss of 14 lives following a building collapse on Monday remains a very painful reality. ISAAC SHOBAYO reports the many sides to the sad occurrence and government’s efforts to avoid a recurrence.

THE collapse of a two storey building housing pharmacy shops, public toilets and other apartments around Butcher Lane in Jos North Local Government Area of Plateau State on Monday evening, where 14 people were discovered dead in the rubble is still shocking to quite a lot of people considering the circumstances surrounding the incident. It has been an unpleasant narrative of tragedy following the realisation that the deceased were all members of two different families. They reportedly died as a result of suffocation under the rubble before help could get to them.

Prior to the unfortunate disaster, Nigerian Tribune learnt that those living in the ill-fated building, most of whom were relations of the owner of the house, Habib Nalele, had notified him over some cracks and defects in the structure. Nalele who reacted promptly to the tenants’ observations, visited the house on Monday afternoon with masons and other labourers to commence work on the affected parts of the building.

A relation of the landlord, Musa Suleiman, said while conducting workers round the affected building, the structure suddenly collapsed and buried him and other occupants, adding that the collapsed building also affected other buildings on both sides of the affected structure, injuring some of the occupants. Five of them are presently being treated at Jos University Teaching Hospital.

“It was a terrible scene that evening. After their corpses had been removed from the rubble, I personally counted 14 bodies before they were buried. The emergency services did not arrive on time but people living around here made efforts to rescue some before the arrival of officials of the National Emergency Management Agency which came with excavators two hours after the collapse,” he said.

At the end of the rescue operations, 14 people from two different families and two others who were within the premises to transact business, probably to buy drugs in the affected building which housed a pharmaceutical store, lost their lives with five others who sustained injuries.

Giving the breakdown of those who lost their lives, Danjuma Ibrahim who lives adjacent to the collapsed building said on the ground floor of the building was a pharmaceutical shop owned by the landlord, adding that a pregnant woman and three others working therein died.

“The first floor of the building was occupied by the son of the landlord, his wife and three children, while another son and his two children lived on the last floor of the two-storey building. All of them were in their separate apartments when the incident occurred. They died in the rubble. ‘No one came out alive. The landlord himself and other ten relations died in the rubble. Apart from this, there was a family of five which lived on the premises, they also died as well. Based on the number of those we buried on Tuesday, they were 14 in number,” he said.

“I was in my shop with two of my children when the incident happened; the pole between the building and my shop fell and my son sustained injuries. But the people in this area had drawn the attention of those living in the building to the defect for long without any response until it collapsed,” he said.

A cross section of people who spoke to  Nigerian Tribune blamed the landlord who also died in the collapsed building for his lackadaisical attitude to the state of the building before it eventually caved in.

Shehu Ibrahim who has a shop close the building said the structure had been a source of worry to those within the vicinity for quite some time, adding that from all indications, the right materials were not used for the building.

According to him, “From calculation, the structure was built five years ago and those living within the area began to notice some defects in the building shortly after it was completed. It was so unfortunate that the landlord died in the building along with some of his children and their wives living in the house.” 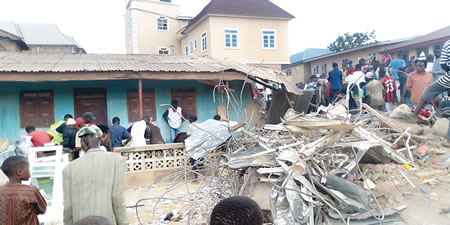 The Plateau state deputy governor, Professor Sonny Tyoden, who visited the scene of the incident, sympathised with the families that lost their relations and directed the Jos Metropolitan Development Board (JMDB) and other relevant agencies to begin certification and subject other buildings in the area to a solid test, adding that other buildings within the metropolis of Jos and its environs too should be monitored to avoid future occurrence.

Apparently reacting to the incident, the management of JMDB called on members of the public that reside in such structures to vacate same immediately and enjoined them to report to the board wherever they noticed any defective structure for necessary action.

The management of the board in a statement said it has set in motion modalities as provided by law towards the removal of all defective, poorly constructed and unapproved structures within the metropolis.

A civil engineer, Mr. James Bityok, said the incident ought to be a wake-up call for the JMDB and other bodies saddled with the regulations of building construction, stressing that within the vicinity of the incident there were other dilapidated structures that could cave in any moment, especially during the rainy season.

According to him, a situation where JMDB closed its eyes to anomalies in terms of construction of building should be over, the supervising ministry of work and others should wake up from their slumber.

Meanwhile, sympathisers have continued to throng the residence of the late Kabiru Nalele at Mango Street in Jos North Local Government Area. The surviving relatives of the deceased are still at a loss over the sad occurrence which befell their loved ones.

‘Even my family is ashamed to see me, coming back empty-handed with two kids’