Full integration of FPSO should happen in 8 years —Wabote 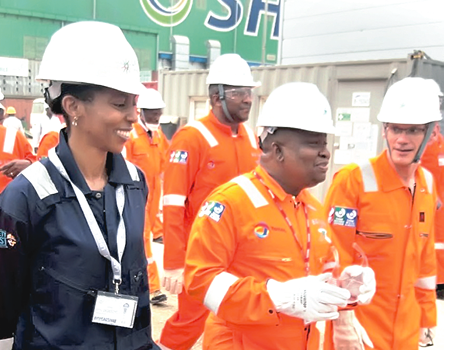 The Nigerian oil and gas industry must strive to develop local capacities to execute full fabrication and integration of Floating Production Storage and Offloading (FPSO) vessels in-country within the next eight years, the Executive Secretary, Nigerian Content Development and Monitoring Board (NCDMB), Engr. Simbi Wabote has said.

He stated this during the inspection by the Minister of State for Petroleum Resources, Dr. Emmanuel Ibe Kachikwu and other top officials of the oil and gas industry to the Total Exploration and Production Nigeria Limited’s Egina FPSO docked at the SHI-MCI Yard, LADOL Free Zone.

The Executive Secretary commended Total E&P for setting high Nigerian Content benchmarks with the Egina project, in engineering, fabrication, testing, coating and integration, stressing that the challenge for forthcoming projects would be how to raise the bar. “Our aim is to stretch the limit to get more for Nigeria. Our aspiration is that come the next seven to eight years, full integration of an FPSO must happen in Nigeria.”

Already the Board and major operating companies are working towards full domiciliation of FPSOs. The Zabazaba deepwater project being promoted by Nigerian Agip Exploration Limited (NAE) in partnership with Shell Nigeria Exploration and Production Company (SNEPCo) and the Bonga South West Aparo (BSWA) deepwater project also developed by SNEPCO have been planned to domicile 50 percent of the fabrication of modules and integration of the FPSOs.

He also charged other operating companies in Nigeria to take a cue from Total’s can-do attitude and their fervent belief in the Nigerian capability. “When the oil price fell to almost $27 a barrel, they did not stop the project. They continued and Nigerians were engaged.” The first key step he said, is for companies “to stop looking for waivers and change the default thinking from ‘it cannot be done here’ to ‘what do we need to do to make it happen’.”

The NCDMB boss also affirmed that the Egina project has changed the narrative about the capacities and capabilities of oil servicing companies in Nigeria.  According to him, “the project simply raised the bar in local participation in various scope covering the Wells, Subsea Production Systems, Umbilicals, Flowlines and Risers, FPSO topsides, and Offloading buoy. “One of the Nigerian contractors that fabricated the Buoy completed it three months ahead of schedule. The argument often put forward by project promoters is that Nigerian Content is expensive and cannot deliver on schedule. Egina has buried that mindset for forever.”

He also underscored the need for new projects to sustain the achievements and employments that were created on the Egina project.

In his remarks, the Minister of State for Petroleum Resources commended Total for the feat noting that local capacities deployed to fabricate the Egina FPSO was sufficient to solve the nation’s electricity challenges, refine petroleum products to meet the needs of the populace, build durable roads and address other infrastructural deficiencies.

Kachikwu charged project promoters in all spheres of the energy sector to fast track their projects, noting that the Federal Government was in a hurry to industrialize the nation and increase the volume of crude oil production at competitive costs.

In view of the oil prices which currently hover within the range of 60 dollars per barrel, the Minister informed that the Federal Government will soon prioritize oil production from fields that bring more returns to the nation as against others that operate with high production costs. He said, “we will begin to pay more emphasis on where we make more money. As you look at your numbers and the terms under which you want to develop these fields, please spend a good amount of time in checking the bottom-line and what goes to the Federation Account. There is no need building a huge $70 billion facility without commensurate value addition. Those kinds of things wouldn’t happen anymore. So the terms will change and basis on which you will proceed will change.”

Also speaking, the Managing Director of LADOL, Dr. Amy Jadesimi highlighted the key roles played by the Board on the Egina project. She said, “the feat would not have been possible if NCDMB had not insisted and if Total had not taken a huge risk when nobody thought it was possible to support us. I also want to thank NCDMB for providing us the financial support.”

Kachikwu, others to attend AOW 2018