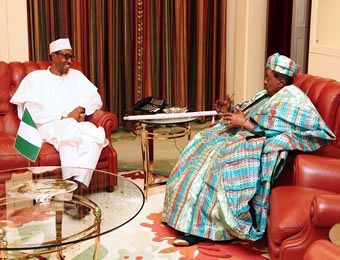 A foremost Yoruba traditional ruler, Oba Lamidi Adeyemi, on Sunday, sent a Save Our Soul message to President Muhammadu Buhari over the siege on Yoruba land by Fulani herdsmen with allegations of killing, kidnapping, raping and other heinous crimes, as he gave a stern warning that the people were fast-losing their patience.

According to Oba Adeyemi, the pseudo herders sometimes in military uniform, have created a climate of fear and uncertainty in Yoruba land, with the Federal Government and security agencies showing signs of ambivalence and helplessness as the country slides to anarchy.

In a letter with the title: Yoruba question in Nigeria’s conundrum, to President Buhari, the monarch said the current situation amounted to a serious national emergency because at a time the rest of the world were making appreciable progress in providing enhanced standard of living, Nigerians were living under the fear of banditry, brigandage, rape, kidnapping and terrorism.

The letter is coming as the remains of Mrs Funke Olakunri, the daughter of the leader of the pan-Yoruba organisation Afenifere, that was killed by suspected Fulani herders about two weeks ago, is interred today in Akure, the Ondo State capital.

“In Yoruba land, we are scared and worried about the outrageous audacity and effrontery of these criminal elements in carrying out their activities and without any challenge by security operatives,” Oba Adeyemi warned.

“Apart from massive destruction of farms and crops planted on them, the new wave of Fulani, pretending and disguising as herders have unleashed a reign of terror on Yoruba land. They destroy crops, they kidnap men and women, violate and rape our women, right in the presence of their husbands.

“What this portends is definitely more than the simplistic interpretation of farmers/herders’ clash but the deliberate acts of hostility and criminality.

“What makes it worrisome is the fact that for reasons best known to the police establishment, they have not been apprehending or pretend to be in the defence of victims.

“There is always a tendency to blame the victims and demonstrate helplessness in apprehending and bringing perpetrators to book to face the full wrath of the law.

“It is even said, Mr President that these criminal pseudo herders go about their nefarious activities in broad daylight and many times in military uniform. They carry sophisticated weapons, the likes of which are only available to state actors.

“There seems to be no doubt that the security apparatus of the country is both overstretched and rustic. The philosophy of policing the State, protecting lives and property and ensuring the existence of atmosphere that is conducive to life and living in Nigeria is lost on the security personnel.

“In Yoruba land, we are scared and worried about the outrageous audacity and effrontery of these criminal elements in carrying out their activities and without any challenge by security operatives. In situations, where money exchanged hands, the police are adequately equipped to trace every paper money issued by the Central Bank of Nigeria.

“Intelligence gathering concerning money paid as ransom should lead, finally to these criminals since they would eventually make transactions with the proceeds of their illicit and criminal activities.”

Oba Adeyemi emphasised the precarious state of security questioned the competence and neutrality of the existing security architecture of the nation.

“This is a serious national emergency, when Fulani herdsmen are engaged in criminality all over the country and the sitting Federal Government seems helpless and generally unperturbed by what is going on in the security organisations.

“There is no doubt that some leaders of these security organisations are either incompetent or bankrupt of ideas. Some are even compromised to take any decisive actions against criminals.

“What we are witnessing in Nigeria is an anomaly because it is inconceivable that in the 21st century, when the whole world is making appreciable progress in providing enhanced standard of living, Nigerians will be living under the fear of banditry, brigandage, rape, kidnapping and terrorism.”

Oba Adeyemi, who stated that he had never been “timid or shy’ of his unalloyed support for the administration of President Buhari to deliver Nigeria to the Promised Land, however, said the ambivalence of the Federal Government towards the worsening insecurity caused by murderous herders did not only pose a grave danger to living in the country but also impugned on the integrity of the nation in the comity of nations.

“As more and more countries issue travel restrictions to Nigeria and parts thereof, it is just a matter of time for Nigeria to lose whatever gains it has made in repositioning itself for more decisive participation in the international system.

“I trust that you will not allow this to happen and will quickly and decisively take immediate steps to re-establish confidence in your government and demonstrate the capacity of the state to protect all legitimate interests,” Oba Adeyemi counselled.

The monarch said that though his confidence in the president remained unshaken, he was, however, particularly worried by the security situation inthe entire Yoruba-speaking area of the country, including Kwara, Kogi and Edo States.

Citing a few cases of high profile kidnapping, killings and banditry that were perpetrated by herders, Oba Adeyemi said the fully armed Fulani herdsmen had acted in broad daylight on virtually all highways, especially the bushy ones.

“Whether in Owo, Akure, Ilesa/Ife-Ibadan road or Ibarapa zone and Ijebu area of Ogun State, the story is the same. I have help series of consultations with opinion moulders and eminent Yoruba leaders across board about the menace of these cattle herdsmen with such assault like raping of our women and in some occasions, in the presence of their husbands. That is apart from massive destruction of our agricultural lands; which ultimately points to imminent starvation.

“On top of it all is the menace of professional kidnappers usually in military uniforms. What is more worrisome about the kidnapping notoriety is what looks like impunity which these kidnappers enjoy their nefarious activities.

“After due consultations with Yoruba leaders and as the pre-colonial head of the Yoruba nation, we are worried by the audacity of these lawless people in effecting their illegal acts in broad daylight on our usually bushy highways without any arm of security being able to do anything.

“Worse still is the confidence with which they demand ransoms and collect such illegal levies at designated spots without any arm of security being able to lay siege on them as it was the practice in the recent past.

“Now, we cannot even talk of parading suspects, when in actual sense, no major arrests have been made in this part of the country. Without arrests, we cannot talk of their facing of the law. Unfortunately, and painfully indeed, in the face of the apparent helplessness of our security agencies, where do we go from here?

“It is at the wake of this manifest frustration of our people that our people have found it unavoidable, even though reluctantly to resort to alternative measures to safeguard their lives and property.

“Suffice to say that is most parts of Yoruba land, their pre-colonial military structures have not been totally collapsed. Hence, such structures like Odua Peoples Congress (OPC), Agbekoya and other vigilante groups.

He listed the most recent cases of kidnapping and murder linked to herdsmen to include: certain individuals were kidnapped along Erio-Aromoko road, Ekiti State, who were tortured and exposed to danger in the forest for about two weeks.

The victims included the Secretary of the Nigerian Bar Association (NBA), Ikole Branch, Adeola Adebayo, whose decomposing body was eventually found after a ransom price of N4 million had been paid.

Another instance were two officials of the Federal Road Safety Corps both Yoruba, who kidnapped along the Ilesa-Akure highway, during which an unnamed individual lost his life.

The other case involved a legal practitioner based in Obadan, Musibau Adetumbi, who was on his way to attend an Appeal Court session in Akure when he was kidnapped along the Ilesa-Akure highway.

Another victim of the victim of the herders was a surgeon at the Obafemi Awolowo University, Ile-ife Professor Adegbehingbe, was kidnapped along the Ibadan-Ile-Ife highway; Dr Muslim Omoleke, the Administrative Secretary of the Independent National Electoral Commission (INEC) was kidnapped around Ilesa, Osun State; Mr Ayo Oladele, an employee of Guinness Nigeria and an old student of Christ School, Ado-Ekiti and Dayo Adewole, the son of a member of Minister of Health, Professor Isaac Adewole, who was kidnapped on his farm at Iroko, a village along Ibadan-Oyo road.

“It is at the wake of this manifest frustration of our people that our people have found it unavoidable, even though reluctantly to resort to alternative measures to safeguard their lives and property.

“Suffice to say that is most parts of Yoruba land, their pre-colonial military structures have not been totally collapsed. Hence, such structures like Odua Peoples Congress (OPC), Agbekoya and other vigilante groups,” he stated.

The Alaafin said as a concerned stakeholder in the present administration, he deemed it necessary to alert President Buhari on the need to quickly respond to the siege on Yoruba land by the Fulani herdsmen because “There is a general impression among opposition groups that you are not known to take decisive and proactive steps in many matters of national interest and that you are not usually too disturbed about the gale of insecurity in Yoruba land.”