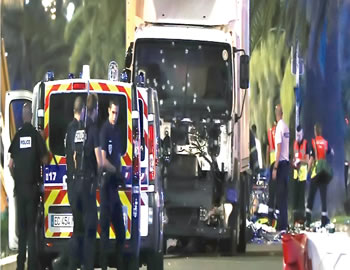 Once again, French flags worldwide were flown at half-mast on Friday morning following the killing of at least 84 people including children in an act of suspected terrorism orchestrated by 31-year-old Mohamed Lahouaiej Bouhlel, a Tunisian born French man during the Bastile Day celebration in Nice.

Bastille is a national celebration and holiday in France to celebrate the breaking into of the Bastille- an 18th century medieval fortress and Parisian prison where political rebels were held. The prison, which was a symbol of tyrannical Bourbon authority in central Paris, was broken into in 1787 during a deep economic and political crisis. Following the king’s dismissal of the liberal minister of finance, Jacques Necker, and the concentration of Royalist troops in the capital, progressive Parisians feared a coup against the National Constitutional Assembly.

As a result, violence and conflict between Royalist and anti-Monarchist elements erupted across Paris, with the Bastille’s garrison eventually finding themselves surrounded by an armed mob on the morning of 14 July.

After hours of negotiation and increasing frustration, the mob numbering just under 1,000 broke into the fortress. Following hours of fighting, they took the castle at the cost of nearly 100 assailants’ lives and one defender.

Today, rather than commemorating the storming of the Bastille itself, the three tenets of the republican national motto; “liberty, equality and fraternity,” is celebrated.

In addition to patriotic pride, Bastille Day in France will henceforth bear the marks of Thursday’s bloodbath. As a three months state of emergency is declared, the question on most people’s lips across the globe is, why France?

Police records show Bouhlel’s last appearance in a criminal court to be in March when he was found guilty of violent contact but had no known terrorism links and was not under surveillance.

If Bouhlel is linked with a terrorist group or any takes responsibility for his actions, this would be the third major terror attack on France in 18 months.

While John Schindler, the national- security columnist for The New York Observer, is not surprised Paris is a target. Tweeting after the November 2015 attacks in Paris where 130 people were killed, he wrote: “Jihadists with Balkan small arms were shooting up France in 1995… got no idea why anybody is surprised.”

Attackers used guns and bombs at several sites across Paris killing eight and wounding more than 200 others in that attack, including the Stade de France and the Bataclan concert hall. However, back-to-back terror attack is an enormous security issue.

Celebrating the Bastille Day attack, ISIS (also known as the Islamic State or ISIL) supporters took to social media to cheer the attack posting posters depicting lone woof attacks in a coordinated fear campaign threatening more attacks to come in European countries. Though ISIS itself has not claimed responsibility, security experts are claiming this could be an individual inspired by the ISIS but more likely directed by a terrorist group.

In Mali, French troops prevented al-Qaeda-linked fighters from taking over the country. Syria being a former protectorate of France is currently under the protection of French military and ISIS is being defeated. ISIS is losing ground and key commanders in both Syria and Iraq.

Also domestically, France’s burqa ban is seen by most in the Muslim community as hostile towards Islam.

“France has all kinds of suburbs, but the word for them, banlieues, has become pejorative, meaning slums dominated by immigrants,”

“Inside the banlieues are the cités: colossal concrete housing projects built during the postwar decades in the Brutalist style of Le Corbusier. Conceived as utopias for workers, they have become concentrations of poverty and social isolation. The cités and their occupants are the subject of anxious and angry discussion in France.”

Being Muslim in France is quiet isolating and most have no patriotic feelings towards their adopted country and as such, it is easy for terror groups to indoctrinate them.

Reports shows that French prisons are breeding grounds for radicalisation. 60% of France’s 70,000 prisoners are of Muslim origins.

“They have been broken by educational failure, family breakdown, and unemployment. They are very fragile people,” says Missoum Chaoui, a Paris Muslim leader who has worked as prison chaplain for 17 years.

Among the French criminals believed to have turned to extremism while in prison is Amedy Coulibaly, a man of Malian descent who shot dead a policewoman and four Jews in two of January 2015 three deadly attacks in the Paris area.

Coulibaly  is believed to have been radicalised while in jail for robbery in 2015.

I just want to make people happy with my music —Olamide

Nigeria in recession: What lies ahead

Brexit: Fate of Nigerians married to Europeans hangs in balance