Forgery case: Court has vindicated us on AGF’s role —Senate 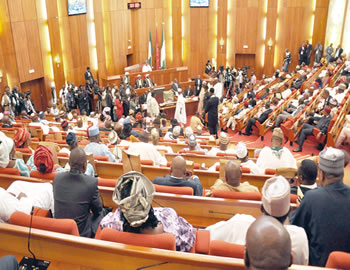 THE Senate, on Sunday, said it had been vindicated by Thursday’s ruling of Federal High Court in Abuja, over the forgery case instituted against its leadership by the Federal Government.

This was as it called on the Attorney-General of the Federation and Minister of Justice, Abubakar Malami, to address the issue of his personal interest in the case.

The Senate said Malami was a counsel for the aggrieved senators who decided to externalise the issue of election of the leadership of the upper chamber of the National Assembly, after they failed in their bid to get their preferred candidate elected.

In a statement, the Senate informed that Justice Gabriel Kolawole, in his ruling on the case, described the forgery case filed against its presiding officers as an abuse of court process and a decision taken against public interest.

Spokesman of the Senate, Senator Aliyu Sabi Abdullahi, who signed the statement, said the ruling by Justice Kolawole further confirmed that Mr Malami was acting personal script in filing the charges, while simply abusing his position as the nation’s chief law officer.

“When the Senate invited the AGF to come and throw light on the forgery case, it was not to challenge his right to file, take over or discontinue any criminal case but for him to explain the issues of conflict of interest, abuse of office, disrespect of a subsisting order of  a court and violation of the principle of Separation of Powers which are being raised against him,” the statement read.

It added that “it should be noted that Malami’s name is still on the list of lawyers defending Senator Suleiman Hunkuyi and others in the Federal High Court. We invite all Nigerians, including those shouting over whether it was right for Senate to invite the AGF or not, to read the ruling of Justice Kolawole and conclude whether Malami is still fit to be AGF in a government which canvasses change and rule of law.

“Our position as a law-making chamber is that the Office of AGF is a sensitive and strategic one, being the only other office in the executive arm apart from that of President and Vice-President to which the constitution specifically assigns some roles and powers.

“It must, therefore, be occupied by a sober, law abiding, brilliant, mature, broad-minded and less partisan lawyer. Mr Malami is yet to convince us with his handling of this case that he possesses these attributes. We call on him to respect the ruling of the court and to redeem the integrity of his office and admit his error by invoking his power under Section 174 (1) as noted in the ruling of the honourable judge,” the statement said.

It called on all parties to heed the advice of former Vice-President Atiku Abubakar that “it is time to move on. Truly, Nigeria needs our collective energy to address the various challenges.”