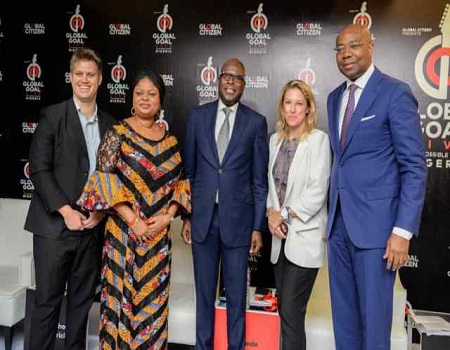 The Chairman, Global Citizen Nigeria, Mr Tunde Folawiyo has enjoined private sector and civil society to map out plans to address the issue of poverty in the country.

Folawiyo made this plea during a ‘Global Goal Live: Nigeria Policy Forum’ held recently in Lagos.

“Nigeria is already dubbed the poverty capital of the world. That is very worrisome statistics and both the private sector and civil society must begin to work to address as a people. We cannot continue to just stand and keep working in silos on the issue of extreme poverty because it is a challenge that puts everyone at risk” He said.

Tunde said that this action is In line with the United Nation’s Sustainable Development Goals, SDGs, to end extreme poverty by 2030; hence, Global Citizen is working with the Nigerian private sector to harness resources to achieve the objective of ending poverty.

The Chairman explained that Global Citizen is a global movement for citizen-led actions to eradicate poverty and improve human living conditions.

The Vice-Chairman of Global Citizen Nigeria, Mr Aigboje Aig-Imoukhuede said that out of the 30,000 Primary Healthcare Centres in the country, less than 3000 are functioning well.

Aigboje noted that Universal Healthcare cannot be achieved without a robust Primary Healthcare system as the bedrock.

He pledged to build a world-class Primary Healthcare Centre in each of the 774 Local Governments in Nigeria and called on other wealthy Nigerians to commit to different initiatives that would help the country to meet other objectives of the SDGs by 2030.

The Co-founder, Global Citizen, Mr Michael Sheldrick explained that the movement has created millions of positive citizens’ actions across the world as part of efforts to hold leaders accountable in the fight against hunger and poverty.

Sheldrick said despite the enormous wealth in the world, poverty is increasing in certain regions of the world especially in Africa where Nigeria as a country is projected to host 25 per cent of the world extremely poor people in the next 15 years if urgent actions are not taken.

“We are working with the state and local governments because that is where the people are.

“We are happy to collaborate and work with Global Citizen eradicate poverty in our country.

“It is only when we the public and private sectors work together we can solve the problem of poverty of our people,” She said.