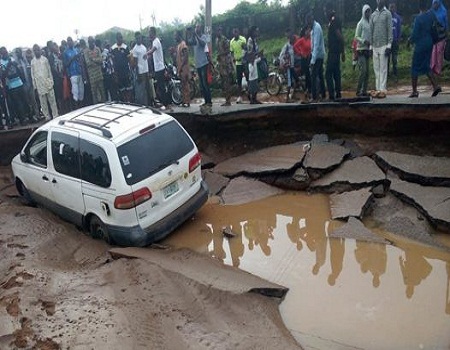 The people of Aseyori community of Ado-Ekiti in Ekiti state have called on the state governor, Dr Kayode Fayemi to begin the dredging of the Ureje river to prevent flooding from further destroying their property in the area.

The appeal was sequel to the destruction of a N20million-worth of fish farming and residential buildings by flood following the downpour witnessed last week in the state from the Ureje river located about a few kilometres upstream of the community due to poor dredging and channelization of water.

Speaking on behalf of the landlord association, Dr Ebenezer Adebayo explained that the dredging and channelization became necessary in view of the community’s rich soil for growing vegetables, yams and cocoa among many other arable crops. which are being destroyed.

He lamented that the recent flood affected his Aquatem Fisheries Research Farm and rendered many workers both skilled and unskilled jobless, which he said had affected the socio-economic life in the area.

According to him, “Unfortunately, the fish farm and some households in Aseyori community are always affected by heavy flood from Ureje Reservoir and River which is located about few kilometres upstream of Aseyori community. The poor dredging of Ureje River and the poor channelization of water are suspected to be the main causes of the incessant flood.

“The heavy downpour caused Ureje Dam to overflow its banks which flooded Aseyori and surrounding communities. The flood destroyed many properties and displaced many residents of the affected area.

“We are appealing to our amiable Governor, Dr Kayode Fayemi to intervene for over 10,000 inhabitants of Aseyori and its environs in their plight, as we do not pray to experience the 1980 Ogunpa flood disaster of Ibadan or the recent flood in Pakistan.”

He explained that urgent intervention of the government in the area would help, “in order to safeguard lives and property, ensuring food security, encourage investors as well as securing the biodiversities within and around the river channel.”