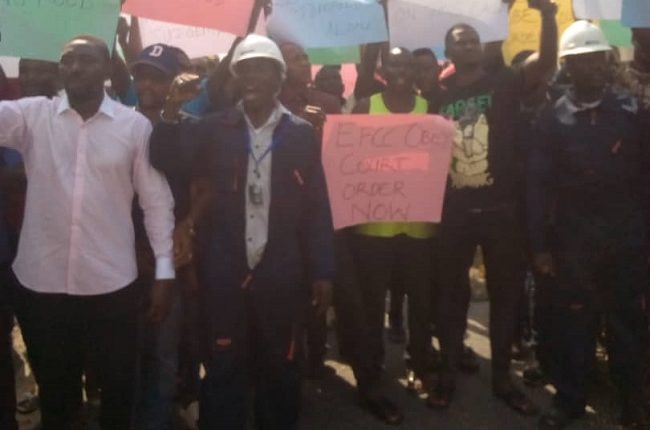 Five months after being vindicated of corruption charges by a Federal High Court, former warlord, Chief Government Ekpemupolo alias Tompolo, has called on President Muhammadu Buhari to prevail on the Economic and Financial Crimes Commission (EFCC) to return his confiscated assets.

The call was made, on Wednesday, at Edjeba jetty in Warri, Delta State when hundreds of Tompolo’s maritime workers staged a peaceful protest against the continued confiscation of his jetty and other assets by EFCC.

It will be recalled that a Lagos Division of the Federal High Court had on Wednesday, July 15, 2020, dismissed all the 40-count charges bordering on alleged N45.5 billion fraud filed by EFCC against Global West Vessel Specialist Ltd linked to Tompolo who was also declared wanted.

The Court upheld the ‘no case submission’ by Tompolo and acquitted him of all the allegations as “the prosecution failed to establish a prima facie case” against him.

Urging President Muhammadu Buhari to intervene on the matter, the workers lamented the hardship forced on them and their families following the sudden confiscation and deprivation of access to the company by EFCC since July 15, 2020, when the judgment was given in favour of Tompolo.

Speaking to newsmen at the protest ground, Managing Director of Mieka Dive, a company linked to Tompolo, Chief Keston Pondi, called for government’s presence during the reopening of the company.

He disclosed that properties worth millions of naira have been reportedly looted from the yard which had been under the surveillance of security operatives.

“Our demand here today is that our yard is opened for us. We will want the government to be present when the yard is opened because properties worth billions of naira were in the yard.

“Information reaching us at the moment is that everything has been looted. Most of the ships, our barges are all sunk. Then, most of the caravans have been looted and broken.

“So we want the government to open our yard for us. Not just opening the yard, but we want them to come and take inventory of the yard and pay appropriate compensation as to all the properties that have been looted,” the MD stated.

Pondi added that all efforts to prevail on relevant agencies to reopen the place had been unsuccessful, saying “we have submitted various documentations, we have been talking to all the government agencies. We have spoken to DSS. EFCC has never granted us audience in any form.”

The administrative/dive manager of the company, Kenneth Osagie-Aiwe, noted that families have been hungry, and some dying since the confiscation.

“It is through the work we get here the company makes money to pay these workers and for years now, the workers had no access to work here.

“We are asking the Federal Government to tell the EFCC to give clearance to the company to start normal operations. Because as we speak, some of our wives are here present, what affects us, the husbands, affects them as well,” Osagie-Aiwe lamented.

Tompolo, in a statement made available to journalists, insisted that EFCC has no legal reason to refuse to return his properties, recalling that three years ago, he formally reported noticeable massive looting at the seized jetty to the Presidency “upon which a few junior naval ratings were court-martialled.”

He then urged President Buhari to intervene by directing the anti-graft agency to unseal his jetty and other properties in line with the rule of law as well as pay compensation for looted and damaged items.