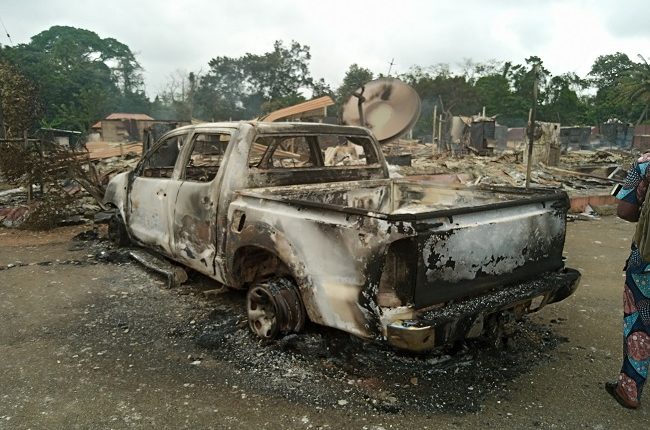 A midnight fire outbreak in the early hour of Monday gutted the office of the Ondo State Universal Basic Education Board (SUBEB) located at Oke Eda area of the capital city of Akure.

The fire which razed down the whole building also affected the building accommodating the commercial office of the Ondo State Radiovision Corporation (OSRC) located in the same compound.

The cause of the inferno that started around 1 have remained unknown but an official of the Board disclosed that the incident can be linked to power surge, saying the whole town was in darkness on Sunday night.

The Permanent Secretary of the Board, Mr Kayode Ogundele, who described the incident as unfortunate and devastating, said the fire had already wreaked havoc on the building before men of the fire services were alerted.

He explained that all buildings and files in the offices were affected by the fire and burnt down because of the office was demarcated with wood.

Ogundele said “All the buildings, because it was made of wood, were gone. It was completely burnt. We can’t lay our hands on anything. Everything in the office is gone.

The official, however, ruled out arson and suspected that electrical surge might be responsible for the fire outbreak, saying the wooden structures had been there since 1976.

He said the board would wait for the outcome of the investigation for the causes of the fire, saying “we cannot say for now the cause of the inferno”

Also speaking, the Chairman of the Ondo State Radiovison Corporation, Kunle Adebayo, who was at the premises to ascertain the level of destruction said he was informed about the fire at 1 am.

Adebayo said the cause of the fire incident would be investigated and said “I came here at 1:30 am and saw the raging fire. Nobody could access the place. We watched as the fire spread to the four buildings but we thank God no life was lost.”

The wooden structures built over 30 years ago and housing offices of the Ondo State Scholarship Board, Ondo State Radiovison corporation, Ondo State Universal Basic Education board annexe and French language centre were all gutted by fire.

Journalist shot as gunshots rend the air in Lokoja