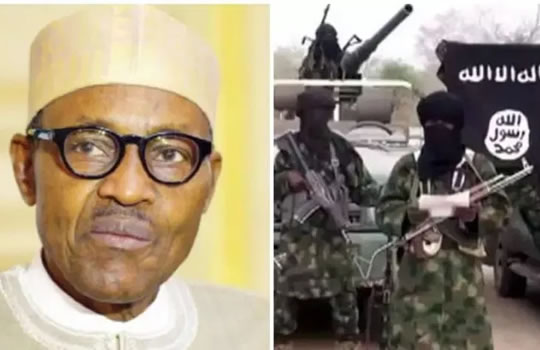 Share
Amnesty coupled with the reintegration granted repentant Boko Haram members by the Federal Government has been described as heinous, wicked and barbaric.

An Urhobo leader of thought and chieftain of the People’s Democratic Party (PDP), Chief Sunny Onuesoke, made the comment while reacting to the ongoing reintegration of repentant Boko Haram members back to the society.

“Even in the barbarian days, there is what we call ‘rules of engagement,’ not to talk of the 20th century where justice is the order of the day.

“It’s a shame that Nigeria has degenerated to this low level of injustice against our motherland. There’s is a global word today: “WE DON’T NEGOTIATE WITH TERRORISTS,” not to talk of granting a killer, murderers amnesty.

“The question is amnesty for what? For burning down churches and mosques and killing innocent Nigerians? What is the response of the Federal  Government towards the families of the people that were killed?” he queried.

On an attempt by some northern leaders to draw a similarity between activities of Boko Haram and former Niger Delta militants, Onuesoke flayed such thoughts.

“The Niger Delta so-called militants were not militants, but people advocating for their God-given wealth and rights.

“The Niger Delta people were only requesting what is theirs, but the Federal Government came with attacks on them and tried to confiscate the people’s natural resources they are endowed by God.

“The Niger Delta people are genuine agitators and not killers and murderers like Boko Haram. There’s no comparison between the two issues at stake: one is a criminal and the other agitators,” the former governorship aspirant asserted.

CORRUPTION, INSECURITY: Nigeria needs a Rawlings now —NDP
NATIONA L chairman of the National Democratic Party (NDP), Chidi Chukwuanyi, says the state of corruption in the country calls for the replication of the Ghanaian experience under former President Jerry Rawlings in Nigeria. Rawlings,  known for his no-nonsense position against corruption, executed Ghana’s past… Read Full Story
Nigeria Records 438 COVID-19 Cases, Total Now 39,977
Nigeria’s tally of confirmed COVID-19 cases on Saturday rose to 39,977 as 438 new infections were announced by the Nigeria Centre for Disease Control (NCDC)… Read Full Story
Resign, Nigeria is a failed state under you, Middle Belt, others tell Buhari
DISTURBED by the unabated killings in the Southern Kaduna and other parts of the country, the Middle Belt Forum  (MBF) has called on President Muhammadu Buhari to resign or be ready to secure the lives and properties of the citizens… Read Full Story
Reintegrating ex-terrorists wrong —Adebanjo, M/belt, others
NOTABLE Nigerians, including the leader of Yoruba socio-cultural organisation, Afenifer, Chief Ayo Adebanjo, on Saturday,  played the Federal Government over the reintegration of 601 repentant Boko Haram terrorists at the weekend… Read Full Story