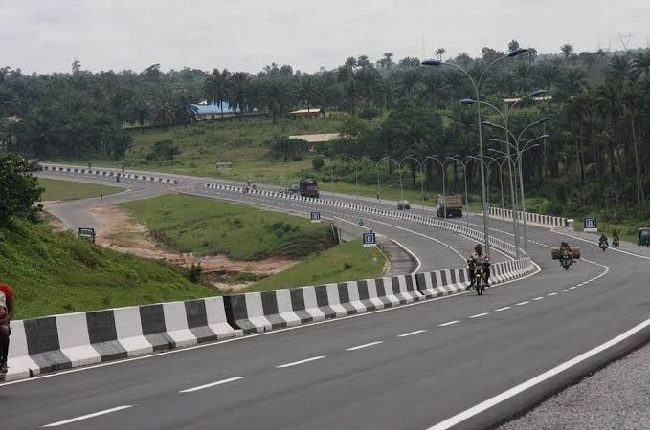 As the dry season begins, three construction firms including Julius Berger PLC, China Civil Engineering Construction Company (CCECC) and SERMATECH Nigeria Limited, have been mobilised to three sections of the Calabar-Itu federal highway following the release of N185 billion by the Federal Government, it was learnt on Wednesday.

The Senior Special Assistant (SSA) to President Muhammadu Buhari, Senator Ita Enang, who inspected work on the road, told Journalists in Uyo, the Akwa Ibom State capital, on Wednesday, that the cash was released by the Nigeria National Petroleum Corporation (NNPC) to the Federal Ministry of Works to facilitate fixing of the road.

The Federal road which links Cross River, Akwa Ibom and Abia State, has been in a deplorable state for over a decade, subjecting commuters and other road users to severe hardship and pains.

According to the Presidential Aide, the first phase of the contract was awarded to Julius Berger to the tune of N54 billion, with construction works commencing from Odukpani and Ibiono Ibom axis of the highway in Cross River and Akwa Ibom states until it went on holiday.

He revealed the breakdown to include N54billion for Julius Berger, N52 billion approved for CCECC while N79billion was approved for SERMATECH, whose portion has a total of four bridges.

He commended President Buhari, “for his benevolence in sourcing for funds for the project,” assuring that the pains of so many years would be eased off before the rainy season of 2022 sets in.

Enang explained that out of the over N600 billion raised from tax credit window by the Federal Inland Revenue Service (FIRS) from the NNPC to fund critical infrastructure, especially roads, Akwa Ibom/Calabar highway project was given N185billion.

He attributed the delay in the construction of the road to lack of funds and assured the people that the project would be completed with a dualised carriageway by April 2023 since the funds have been made available and urged the people to be patient and cooperative with contractors handling the project.

His words, “We have been having problems of getting funding for the road, but Mr President has asked me to assure you that we raised money from the tax credit window from federal inland revenue service to the NNPC to fund critical infrastructure mainly road infrastructure.

“Out of the over N600billion raised from NNPC as tax credit, a great part that is N185bn has been dedicated to this road. The road was awarded in three tranches. The first money that was available was N54bn and was for Julius Berger, N52B to CCECC and the last N79bn to SERMATECH engineering.

“This road was designed for dualisation since 1972 and only one lane of the four lanes was constructed believing that others would be constructed since then. Thank God, President Mohammadu Buhari has started constructing other lanes with four bridges and he has promised to complete it within the time frame.”

Enang, who commended the SERMATECH Engineering “for being on site and working tirelessly to meet the target and to make the road passable during the yuletide” regretted that Julius Berger failed to come to site, claiming that “they must observe their holiday.”

He, therefore, enjoined other companies to borrow a leaf from SERMATECH in offering effective services that would ensure the project meets the time frame for completion.

The SERMATECH site representative, Engr Joseph Upata, who spoke with journalists that visited the site said the company has reviewed the time frame of the completion of the project from three years to two, saying that their own part of road could be completed by April 2023.

“We have cleared seven kilometres of the road, we have done full earth works. There are four major bridges and several culverts and we have divided ourselves into four teams; another two teams that specialised in the building of bridges are coming next week to make the work faster,” he explained.

Verdict: The claim is false. The content of the article published by these online platforms is not new; it has been recirculated several times and has been debunked.Three firms intensify work as FG releases N185bn for Calabar-Itu highway dualisation