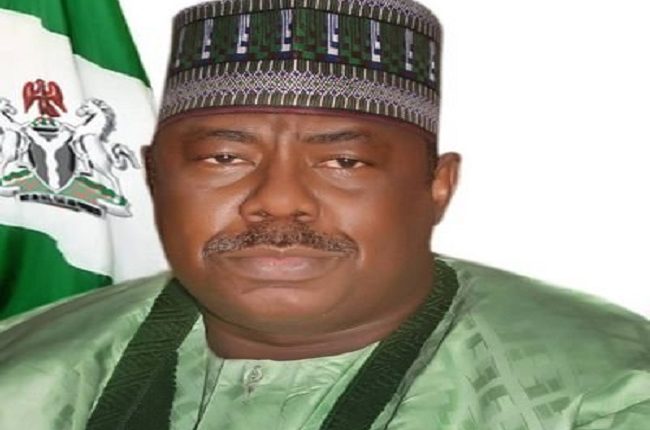 The Minister of State for Agriculture and Rural Development, Mustapha Baba Shehuri has flagged-off yet another distribution of free Agricultural Inputs and quality seeds to smallholders farmers in Gombe State, stating that it would ensure food and nutrition security, create more jobs for teaming Nigerian youths and boost dry-season farming.

While performing the exercise at the Ministry’s office complex in Gombe, Gombe State, the Minister said that it is part of the mitigation measures against the effect of COVID-19 pandemic and the flood disaster that wrecked havoc on the farmlands.

He said the Ministry would support breeder and foundation seed production and link up with the private seed companies to ensure that certified seeds are available to local farmers nationwide.

Shehuri stated that improved rural infrastructure and other value chain support would invariably contribute to the attainment of Mr. President’s desire towards ensuring easy access to quality food and nutrition for Nigerians.

He informed that ‘’ the ministry has supported Gombe state with subsidized inputs with over 350 3HP and 30 7HP irrigation pumps, multipurpose threshers, over 70 Motorized and dual powered sprayers amongst others. Under our world bank assisted nutrition Programme, we have provided multiple trainings and homestead farming input packages including tomato, pepper, pawpaw among others in 5 local government areas in the state as well as irrigation kits designed to improve the household nutrition’’.

According to the Minister,’’ the small holder farmers in the  State will today receive the following free inputs; 10,000 Gum Arabic Seedlings, 15MT of rice seed, 2.5 MT groundnut foundation seeds, 1,000 KG of Castor seeds, 1,500 KG of cashew nuts as well as Ratkin and Liptol – organic insecticides to combat army worm infestation and Equipment like water pumps, maize threshers among others’’

He stated that ‘’so far, the ministry has performed similar exercise in Kano, Kaduna, Katsina, Kogi, Oyo, Cross River and Imo states, with this being the 8th edition, assisting smallhohders farmers with quality inputs to ensure sustainable food security, job creation and revenue generation to grow the nation’s economy’’.

The minister emphasized that  ‘’in our input distribution efforts,  at least 35% of these inputs are targeted at the women farmers, this is in line with the targets set in our national gender action plan and policies aimed at ensuring increased opportunities for women’’.

He also said that ‘’ in order to alleviate the effect of flood on farmers, inputs were distributed to farmers in Jigawa, Kebbi, Nasarawa and Benue state’’.

Shehuri tasked the beneficiaries to make judicious use of these inputs to produce food for the nation while calling on other stakeholders to provide similar support to farmers ‘’so that together we can defeat COVID-19 Pandemic and become self- sufficient in food production’’. The input distribution was kicked-off with two physically challenged people being the first beneficiaries to receive the packages from the Director Federal Department of Agriculture, Hajia Karima Babangida.

In his remarks, the Governor of Gombe State, Alhaji Muhammadu Yahaya appreciated President Muhammadu Buhari led Government for the flag-off of the distribution of Agricultural inputs and quality seeds to smallholder farmers in the state, stating that it would cushion the effect of COVID – 19 Pandemic, promote dry-season farming, boost production and generate income for the farmers and the state at large.

In a separate visit to Bauchi State, the minister  paid a courtesy call on  the Executive Governor of the State, Senator Bala Mohammed where he assured the Governor and his cabinet that ‘’ the Ministry will continue to work with State Governments especially Bauchi State, Farmers and other stakeholders to achieve President Buhari’s promise to diversify the economy, revitalize and modernize Agricultural sector’’.

He further said that ‘’we want to see Farmers earning decent income and to be fully integrated into the mainstream of our National Economy’’.

While responding, Governor  Bala Mohammed, said that the State has result driven policies and programmes which allows investors to invest in the Agricultural sector, adding that the policies would provide conducive business environment for willing investors, create jobs and boost the economic growth of the people.

The Minister also visited  Soro Community  in Bauchi state where  the Ministry through the Department of Rural Development  is constructing  1.5 KM  Asphaltic road  aimed at providing  access road  for  Farmers, increase  production and  locally generated revenue.