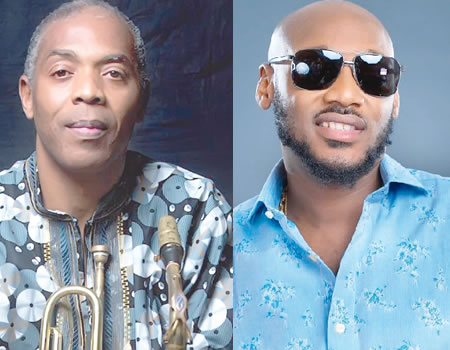 Nigerian celebrities have continued to congratulate musician Damini Ogulu aka `Burna Boy’ over his Grammy nomination.

The Grammy is an award presented by The Recording Academy to recognise achievements in the music industry globally.

The Afro-fusion star was nominated in the ‘Near World Music Album’ category for his highly acclaimed 2019 album, ‘African Giant’.

Following the announcement, veterans in the music industry, Femi Kuti and Innocent Idibia aka 2baba congratulated him on social media.

@Official2Baba tweeted, “Yes ooo. Bless up @burnaboy. It was all a dream.’’

@BankyW said, “Our African Giant has been nominated for a GRAMMY!!!!!!

“Congratulations to @burnaboy, his Mom and the entire team. AMAZING, and well deserved.

“Anything is possible with a little bit of faith and a lot of hard work. So, so, sooo happy for him.’’

@Shaydee wrote, “@burnaboy ma mayne!!!!!! Massive congrats to you blad! You deserve that Grammy nod for sure!!!! #AfricanGiant.”

Toke Makinwa @Tokstarr said, “Burna boy keeps breaking boundaries, this is such an exciting one.’’

@Olamide_YBNL said, “On God!!!!! @RecordingAcad gives @burnaboy that Grammy or we sending @olamide_YBNL over, trust me you don’t want that smoke.’’

Singer, Tekno @Alhajitekno tweeted, “Congrats on every level my brother!!! You deserve collect am! #AfricanGiant.’’

NAN reported that Burna Boy follows in the footsteps of Seun Kuti, Femi Kuti and King Sunny Ade, who had previously been nominated in that category at the Grammy Awards.

Other Nigerian Grammy nominees include, Babatune Olatunji, Wizkid, Timaya and Kah Lo. The only Nigerian to win a Grammy Award remains Sikiru Adepoju.