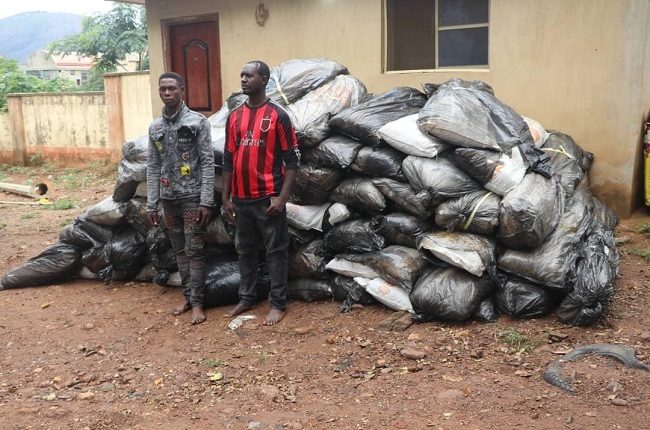 The Federal Capital Territory (FCT) Police Command, of Nigeria Police, working on a tip-off interrupted a chain of illegal supply of prohibited substances, and effected the arrest of two suspects in possession of One hundred bags of Dry leaves suspected to be Cannabis Sativa concealed beneath Fertiliser loaded in a Dangote Truck from Ondo State to the Federal Capital Territory.

The suspects; Sani Muhamed, a 26-year-old male resident of Kano State and Ahmed Usman a 32 years old male resident of Ondo state were arrested by the Command’s Operational Assets attached to the Zuba Divisional Police Headquarters following prompt reaction on the heels of actionable intelligence from Inspection Officers of the Dangote Group of Company fleets strategically positioned for control and management of the fleets of trucks at intermittent locations.

The suspects stated their involvements in the criminal conspiracy and the illegal possession of prohibited substances and affirmed the illegal commodity is worth about 10 million naira while they were contracted and promised about Four hundred thousand naira each. An effort is ongoing to arrest fleeing members of the suspected criminal syndicate while the suspects and exhibits will be transferred to the National Drug Enforcement Agency (NDLEA) upon the conclusion of the investigation.

The Commissioner of Police FCT Command Babaji Sunday who expressed concern about the high rate of drug and substance abuse noted that this is the second such case in less than three months, stressing that the above is one of the root cause for various expressions of crime and criminality.

In a statement issued to newsmen in Abuja, on Thursday, by the FCT Public Relations Officer, DSP Josephine Adeh, the FCT Police Commissioner added that the Command will continue to work hand in hand with the NDLEA to bring to the barest minimum the menace of drug/substance abuse in the Territory.

FCTA maps out new strategy to avert hazards in Abuja

2023: Avoid actions that can bring disrepute to your service, Buhari warns security…