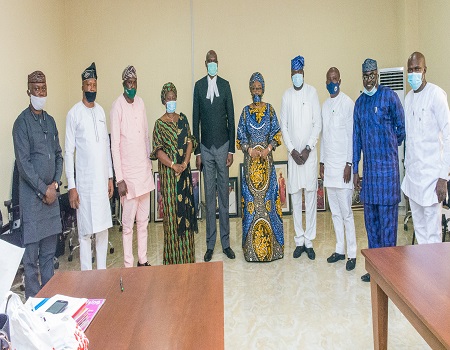 The wife of Ekiti Governor, Mrs Bisi Fayemi, has called on the 16 local government chairmen in the state to sensitise workers and residents about the increasing rate of Gender-Based Violence (GBV) and its ills to individuals and society.

She made the call on Wednesday in Ado-Ekiti during her meeting with the 16 chairmen in her office.

She expressed concern over the alarming rate at which girls and women were being molested sexually in the state and
many parts of the country, and urged the chairmen to join hands with the state government to put an end to the menace.

The governor’s wife said, “We always have problems with violence against women and children but with the COVID-19 lockdown, the incidents increased because most people are at home.”

She called on the chairmen to train Community Development Officers on Women and Children Gender-Based Violence Case Management and Reporting.

Mrs Fayemi also urged them to organise sensitisation and awareness campaigns on Gender-Based Violence Law, as well as establish and maintain a Sexual Assault Referral Centre at the local government areas.

She also called on the chairmen to collaborate with the police to ensure that complaints were heard promptly and professionally.
She, however, pleaded with the chairmen to work with traditional rulers, religious and community leaders to stem the tide of Gender-Based Violence in the local government areas.

The state’s Attorney-General and Commissioner for Justice, Mr Wale Fapohunda, urged the chairmen to always report sexual violence cases in their communities to the appropriate quarters for proper punishment and not to cover up the perpetrators.

The Chairman of Ekiti South West, Dr Kolade Amire, who spoke on behalf of the chairmen, assured the governor’s
wife of their support in putting an end to sexual molestation of the girl-child and other forms of Gender-Based Violence
in the state.