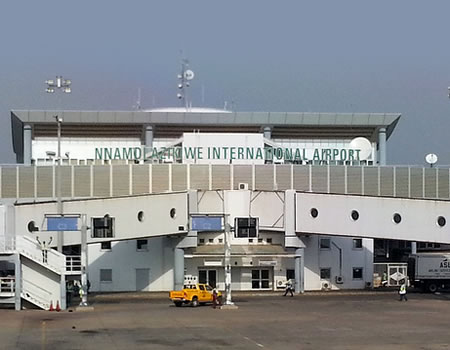 The Federal Airports Authority of Nigeria (FAAN) has deployed over 50 Closed-Circuit Television (CCTV) cameras to check criminal activities at the new terminal of the Nnamdi Azikiwe International Airport (NAIA), Abuja.

Mrs Hajara Musa, International Terminal Manager, NAIA, disclosed this in an interview with newsmen during the inaugural flight of British Airways at the new terminal on Tuesday in Abuja.

Musa said that the management had recorded smooth operation since the commencement of flight operations at the terminal in January when Asky Airlines started using the facility.

She said that the authority was aware of the possibility of insider threat associated with most crimes at the airport, adding that FAAN has put adequate measures in place to checkmate it.

“Having identified the risk attached to insider threat, we have over 500 cameras already installed and we are still going to put more.

“Every day we discover open area and we call the attention of the contractor on the need to empower the place with cameras and there is always somebody at the control room who will alert you immediately he sees anything that is abnormal going on.

“There are no blind spots around the baggage area because it is full of cameras, personnel are at alert, the control room is at alert and we are moving around and round the clock, we are on the ground,” she said.

Musa said the management had not received any complaint from passengers or airlines, adding that the authority will ensure that it met expectations of both passengers and airlines.

According to her, the edifice is very big, the airlines expect that the offices would be surplus but the new concept of aviation is less offices, more space for passengers’ comfort and more facilities for passengers use.

“Before the commencement of this project, there were series of facilitation meetings, security meetings, safety meetings all singing the same song pleading that this edifice is the same as where we are coming from.

“So we were already prepared that people would comply and so far so good, they are,” she added.