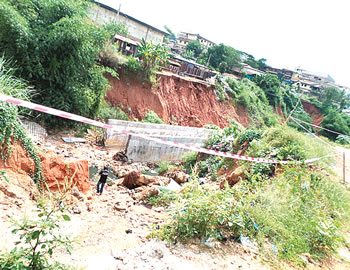 About 100 houses in Ikot Effangha Mkpa Community Estate 2 in Calabar municipality are at risk of collapse due to threatening erosion the area.

The erosion site has cut one of the two main access roads into the estate, thus, preventing residents in the areas from accessing their houses by vehicles.

This is just as some residents in the area have parked out of their buildings for fear of sudden collapse because of the gully erosion.

Worried by this threat, residents of the area have sent a ‘Save Our Soul’ message to the federal and state Ministries of Environment, Nigeria Erosion and Watershed Management Project and the Niger Delta Development Commission.

A traditional ruler in the area, Mr Okon Edet, told the Nigerian Tribune that the gully erosion resulted from failure of the contractors handling the project to complete the secondary drainage, which he said, ought to have run through the estate.

According to Edet, the gully erosion started expanding gradually in 2012, due to the volume of water it received from eight miles, Ikot Effangha Estate 1 and other areas.

He explained that the pressure and volume of water rushing through the secondary drainage was not properly channelled because the construction of the drainage was terminated abruptly.

“Over 100 buildings in this estate are under threat of collapsing while lives and property are equally at risk.

“We are calling on the state and federal Ministries of Environment, NDDC, NEWMAP and the Ministry of Niger Delta Affairs to come to our aid,’’ he said.

Another resident, Mrs Victoria Eborty, told the Nigerian Tribune that residents in the area had collectively written to the state ministry of environment, appealing for urgent intervention in the area.

“We wrote a letter to the Cross River Ministry of Environment in 2016 and officials from the ministry alongside Governor Ben Ayade came and inspected the site, but till now, nothing has been done,’’ she said.

Another resident, Mr Kenneth Onyedire, lamented that he could no longer access his house through the main tarred road, adding that he now accesses his