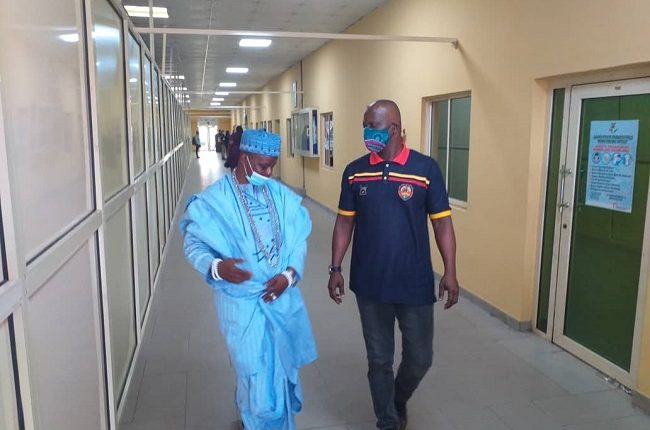 The traditional ruler of the Otumara community in Lagos Mainland Local Government of Lagos State, Kehinde Kalejaiye, said Lagos State will be safe and secured, if the Lagos State Neighbourhood Safety Corps (LNSC) are adequately equipped, adding that the agency is sorting the internal security challenges of the state.

Kalejaiye made the remark during a courtesy visit to the General Manager of the agency, Prince (Dr) Ifalade Oyekan in his office in Oshodi, Lagos where he discussed challenges hindering effective discharge of the agency’s responsibilities.

According to him, LNSC is in dire need of mobility and modern communication and security gadgets to further boost its operations and rid the state of criminal elements.

He urged Governor Babajide Sanwo-Olu to prioritise the needs and zeal.

“I am confident Prince Oyekan has all it takes to address the security challenges residents are facing in Lagos state.

“Within a short period of time as the helmsman of LNSC, he is able to identify criminal hideouts and map out strategies to eradicating them. In spite of limited equipment, I can attest to the display of professionalism by officials of LNSC, not only in my community but across the state.

“LNSC has been complementing the police and other security agencies to reduce, if not totally, eradicate cultism and criminality in the state.

“The man at the helms of affairs of the agency, Prince Ifalade Oyekan, a thoroughbred professional is sorting out the internal security system of Lagos State by rejigging the security architecture of metropolitan Lagos State and deploying operation and intelligence officers to the nooks and crannies of communities across the State.

“And we have seen the impact of this in the reduction in crime rate but there is an emerging trend in criminal activities in Lagos and this is the case of kidnapping.

“The state has been witnessing recurring cases of kidnapping, particularly in the Ajah axis of the State and these calls for urgent actions.

“But being an intelligence agency, the LNSC, complementing the efforts of police and other security agencies, can remedy the situation if adequately equipped.

“From what I observed in my interaction with the General Manager of the agency, the agency lacks mobility, adequate manpower and modern communication gadgets with which they can perform their statutory responsibilities optimally.

“I am therefore appealing to Governor Sanwo-Olu to avail the agency the needed equipment to enhance its operations,” he stated.

He stressed further, “LNSC operations officers are common sight on the street of Lagos on bicycles monitoring activities but these days, they are becoming rare because many of the patrol bicycles and vehicles have broken down and need to be replaced.

“Security is a continuous thing. There is no end to security challenges because as one is being tackled another will spring up. But if prioritised, businesses would grow, there would be the peace of mind for residents and there will be no hideout for hoodlums and criminals in Lagos communities.

“Prince Oyekan is a man of vision with great plans to transform the security landscape of the state therefore I am appealing to Governor Sanwo-Olu to avail him all the needed support to rid the state of criminal elements.”

In spite of the huge investment in the water sector by the government and international organisations, water scarcity has grown to become a perennial nightmare for residents of Abeokuta, the Ogun State capital. This report x-rays the lives and experiences of residents in getting clean, potable and affordable water amidst the surge of COVID-19 cases in the state…   Equip state neighbourhood safety corps for Lagos to be safe, secured, Traditional ruler urges Sanwo-Olu

Independence Day: To make Nigeria great, task for all ― PFN