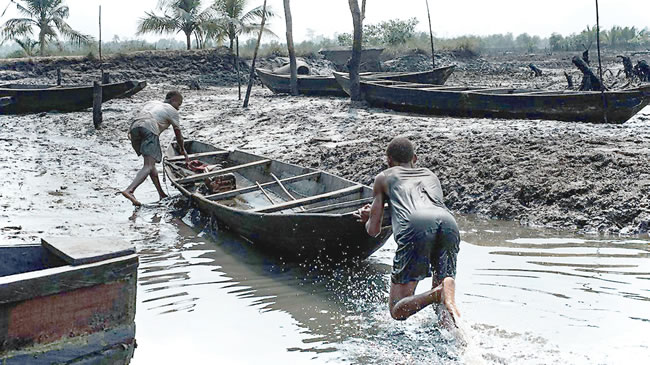 The Environmental Right Action/Friends of the Earth Nigeria (ERA/FoEN) has called for the investigation and public disclosure of oil leaks reported in Bayelsa communities.

The group called on the National Oil Spill Detection and Response Agency (NOSDRA) and the Bayelsa Government not to conceal the result of laboratory analysis of the sample of fresh crude oil deposits discovered in the state.

Mr Alagoa Morris, Head of Field OPerations, ERA/FoEN, made the appeal in a field report on the discovery of crude at Otuabula II community in Ogbia Local Government Area of the state.

The report quoted Gov. Douye Diri’s Senior Special Assistant on Oil and Gas, Mr Timi Seimiebo, who led the team, as saying that NOSDRA took samples of the crude oil for laboratory tests during the visit to Otuabula II bush.

Seimiebo said the team asked the community questions to ascertain whether the crude oil leakage was from operational causes or from illegal oil bunkering activities or leakage from a facility in the area.

The governor’s aide said: “It is a virgin place and everybody has seen there is no pipeline here.

“So we cannot say it is a pipeline leakage. We have asked the community people whether there are any bunkering activities going on here and they said no.

“Anybody doing local refinery operations here, they said no. So the next thing is for the federal and state governments to take action.

“Firstly, we wait for the test result to come out, then other necessary steps will follow.

“If the result shows that it is a refined crude oil substance, the fingerprint will tell us whichever company that owns it. That’s the simple truth.

“However, if it turns out to be a new discovery, it will eventually add to the revenue of the state.”

ERA/FoEN, however, urged the state government and NOSDRA to make public the result of the laboratory analysis and also inform the landlord family, community and stakeholders, accordingly, of the findings.

The rights group advocated that the community should never be sidelined if the result of the sample turned out to be genuine fresh crude oil, especially in negotiations.

“The Bayelsa State Government and NOSDRA should make the result of the sample test public, especially to the family, community and all stakeholders who visited the site of interest as soon as it is out.

“Not just for Otuabula II, if the substance taken for laboratory analysis turns out to be crude oil, it should be made public.

“The issue of best environmental practices by oil companies should always be stressed whenever new negotiations are to be initiated with host communities, including renewal of MoUs to avoid the bitter experiences communities go through,” the report read in part.