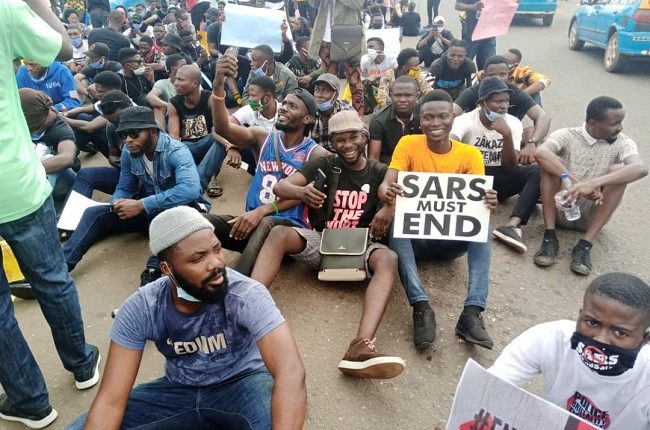 Commercial activities were halted in Akure, the Ondo State capital as protesters campaigning against the Police Special Anti Robbery Squad (SARS) excesses on Tuesday, took over the streets, hindering vehicular movement at the state capital.

The protesters who converged on three locations within the Akure which include FUTA junction, Adegbemile Cultural Centre and NEPA Junction in Akure as early as 8 am, stalled traffic along the major road for several hours.

The protesters within the Akure met at the governor’s office in Alagbaka before heading to the State Police Command along Igbatoro Road to register their displeasure over the atrocities of SARS officials across the country.

Armed with placards with different inscriptions chanting “EndSARS” the protesters vowed to continue with the protest until the Federal Government puts an end to the brutality and extortion by the operatives of SARS.

The protest brought vehicular movements to a standstill for more than six hours, trapping motorists and commuters in the gridlock.

Some of the protesters who spoke with Tribune Online said the attitude of the SARS officials could be seen as a reflection of the frustration with the state of things in the country.

One Funsho Imoleayo said “the economic situation of the country contributed to the brutality and extortion by men of SARS. Imagine a policeman earning less than N10,000 per month. The government needs to address this.

“This protest will not stop here, but a step at a time. We need to address the issue of SARS and then other things will follow.”

Addressing the protesters at the state headquarters of the command, the state Commissioner of Police, Mr Bolaji Salami, said the situation has been addressed by the Inspector General of Police by disbanding SARS across the country.

He assured the protesters of adequate protection just as he appealed to them not to allow hoodlums hijack the protest, urging them to table their grievances in a peaceful manner.

“If you have any issue with any police, don’t hesitate to come to me, discuss with me and the matter will be resolved. This is one of the reasons we are not having a problem with people here. We are here to protect you and not to brutalise you.”