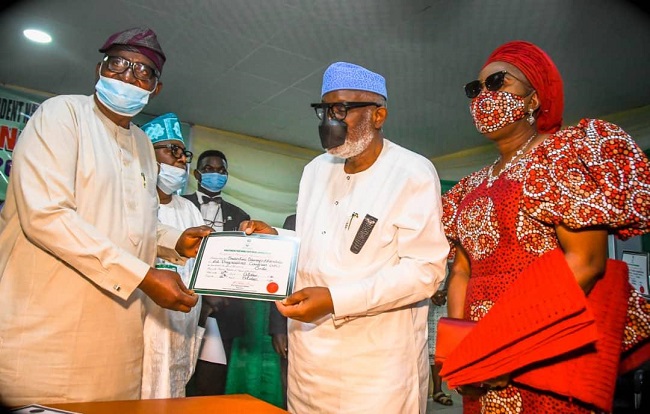 The Independent National Electoral Commission (INEC) on Tuesday presented the winner of the just concluded governorship election in Ondo State, Mr Rotimi Akeredolu and his Deputy Governor-elect, Lucky Ayedatiwa, their Certificates of Return.

Speaking after the presentation, Akeredolu assured the people of the state that his administration will ensure equal development in all the 18 local government areas of the state.

He said: “Whether they voted for me or not, we will treat all the local government areas of the state equally.”

According to Akeredolu, who said the last Saturday’s victory at the election is for the people of the state as they choose a path to unprecedented development with a promise not to disappoint them with the confidence reposed in him.

He noted that the victory recorded has established a number of things for the generation to come, saying the people of the state had spoken. and made a statement with their decision to give him the mandate for a second time.

“It’s a victory that a few things have been established for the generations to come. We have made a statement. No one has ever won with 50 per cent. We won with over 51per cent“

“Our re-election was a divine project. I want to assure the people that we will serve them in way that they have never seen before.“He stressed.

He commended INEC for the successful conduct of the election, Governor Akeredolu said the state noted and appreciated the commitment of INEC to free fair and credible election. 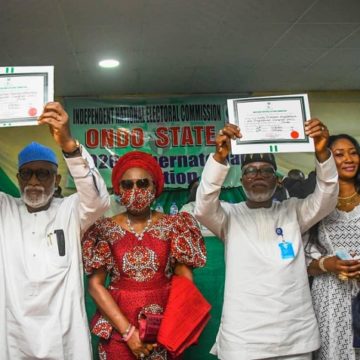 He said the APC is happy over the result of the election and appreciated all security agencies for their conduct before, during and after the election.

Earlier the Chairman of INEC, Prof Mammud Yakubu, who was represented by the Supervising National Commissioner, Dr Adekunle Ladipo Ogunmola noted that the election was highly successful.

He assured that INEC was committed to deepening democracy in the country while giving kudos to the people of the state for a peaceful election.

Akeredolu was declared the winner of the October 10, 2020 governorship elections by INEC, having polled a total vote of 292,830 to defeat his closest rival, Eyitayo Jegede SAN, who polled 195,791 votes.

The Governor and the Deputy Governor-Elect were accompanied to the INEC office by their wives and party leaders across the state.