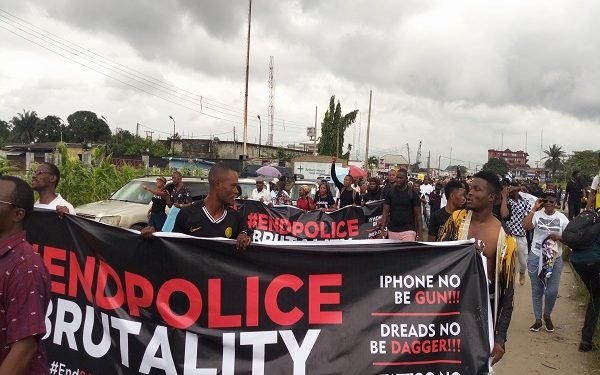 Hundreds of #ENDSARS protesters in the twin cities of Effurun and Warri, on Wednesday, called for the scrapping of the newly-announced Special Weapons and Tactics (SWAT) unit.

The Inspector-General of Police (IGP), Mohammed Adamu has, on Tuesday following sustained anti-SARs protests, announced the creation of another outfit named SWAT to replace the scrapped SARS.

But protesters in their hundreds in Effurun and Warri who took over major roads said while it is good that the Special Anti-Robbery Squad (SARS) has been disbanded, the newly-announced Special Weapons and Tactics (SWAT) unit must also be discontinued.

The youths divided themselves into two groups of protesters in convoys kickstarting the peaceful march at about 8:00 a.m from the popular Delta Mall in Effurun Roundabout.

One of the groups marched through the Effurun-Warri Sapele Road, stopping at Airport, Jakpa while the other group marched towards Enerhen and Deco junctions as well as Estate Roundabout, all in Warri South and Uvwie local government areas of the state.

The peaceful procession caused heavy traffic across the twin cities.

They called for an end to the newly-set up SWAT, describing it as just as another nomenclature for the disbanded SARS to hoodwink the people.

Residents of the areas including motorists, traders, market women, school children and the like were seen cheering the protesters.

The protesters were armed with placards with inscriptions such as “End Police Brutality,” Stop Killing Us,” End SWAT, End SARS,” We said EndSARS, not change them,” I am a filmmaker, I am not a fraudster” and “Stop harassing me,” among others.

Security operatives were, however, spotted from a distance monitoring the peaceful protest.

One of the officers, who summoned courage to address the crowd, urged them to maintain peace with an assurance that a team of policemen have been deployed to provide security.

One of the protesters, Igho Tietie, who spoke with journalists, said Nigerians were not satisfied with the disbandment of SARS and the establishment of SWAT, hence the continued protest.

“We don’t want SARS or SWAT. What is the difference? What we want is a total overhaul of the police. We are asking for an end to police brutality. The disbanded officers should undergo psychological treatment.

“We are also asking the Federal Government to review the salaries of these officers to what their counterparts across the world earn,” Tietie averted

Asked if they do not trust the Police hierarchy as regard curbing the excesses of its men, the protester said “we don’t.”

“They are not upholding that law. Instead we are like sheep for the slaughter. Enough of that!”

Meanwhile at Airport and Jakpa junction, some attempts made by the chairman of the Uvwie Local Government Area, Ramson Onoyake, to address the protesters were rebuffed by the protesters who appeared wary of allowing politicians to hijack the peaceful protest.