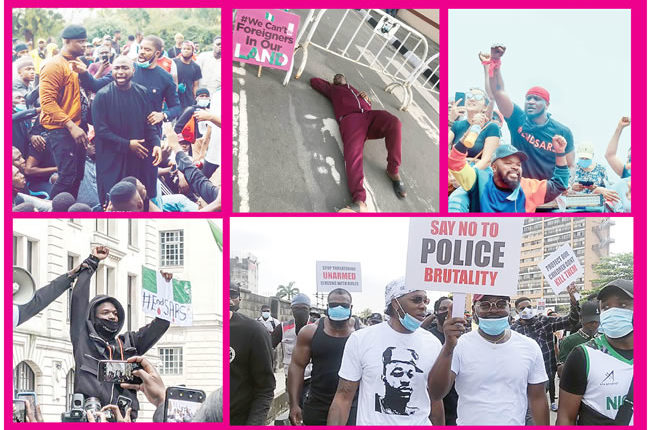 The last two weeks have been very intense and historical as the country witnessed, and is still witnessing, unstoppable and remorseless protests by a vast majority of young citizens all around the nation. A magistrate in Victoria Island, Lagos, before commencing court sitting was quoted to have said, “Nigerian youths seem to have woken up.” The Judge then prayed, “may they remain awake,” and the whole court echoed “Amen.”

The protests were sparked by the licentious killings of young Nigerians, who were termed ‘Yahoo boys’ – A term used in describing cyber-criminals in Nigeria, by men of the disbanded Special Anti-Robbery Squad (SARS), among other allegations of excessive extortion, unwarranted stop-and-search activities and illegal detention of youths across the country. Many whose offenses include; having dreadlocks, riding in expensive cars and even dressing neat and expensive, have also been victims of these hated members of the Nigeria Police Force (NPF).

Last week when the hashtag #EndSARS started trending online, especially on the micro-blogging platform Twitter, the hashtag was top of trending issues in Nigeria and several countries in America and in Europe, as the agitation for the disbandment of SARS by the Nigerian youths became very massive.

Several horrifying videos of the atrocities by the men of the disbanded Special Anti-Robbery Squad (SARS) started surfacing online and this went on until it started generating reactions from several Nigerian celebrities and social media influencers.

Some of the celebrities who immediately joined the #EndSARS protesters when others were observing some distance were singer, Runtown and son of human rights activist, Femi Falana, Folarin Falana, popularly known by his stage name, Falz The Bad Guy. The former was first to declare on his social media platforms that he was going to be joining the protest and asked other Nigerians to join him.

“This has gone long enough and now we must take action! I’ll be leading a protest to #EndSARS on Thursday, October 8th 2020. They must listen to us, they must make/effect real and visible changes! Empty promises won’t work this time!!! Let’s all come out to peacefully reach out to our “Elected” leaders beyond social media!!! Venue/Take Off Point: Lekki Phase 1, Toll Gate,” he tweeted.

Not long after Runtown’s tweet, Falz also announced he would be joining Runtown. Falz tweeted: “I will be at the peaceful #EndSARS protest taking place on Thursday Oct 8 by 10AM. We take off from Lekki Phase 1 toll gate! Cc: @iRuntown.” The duo, however, led the protest and were joined by several Nigeria youths in Lagos, which in turn gave more verve to the movement and moved other Nigerian celebrities to join the protest.

“We are here to let our intention known that we do not want SARS anymore. They come with all sorts of stories about reform what they are allowed and what they are not allowed to do, but it is about time to completely abolish SARS. That is why we are here,” Falz said at the protest.

Runtown said the protest had no leader and there was no room for negotiation as all they were agitating for was an end to police brutality and a better welfare for the serving officers. “It’s important we address some issues and make certain things clear. This movement/protest has No leader, has No hidden agenda, and has no political or individual undertone. No negotiations!! #EndPoliceBrutality. Give your serving officers good welfare, these things are basic and that’s all this movement is about!” he said.

There seems to be no celebrity in Nigeria who has not joined the protest. Many of them have since been noticed both online and offline, professing their support for the #EndSARS movement. Very noticeable also, since the protest started, is comedian, and content creator, Mr. Macaroni, who also joined several youths in a protest on the Lagos mainland,  which climaxed at the state house in Alausa, where many of them slept that day.

“Just heard that another youth got shot in Delta. We are not leaving Alausa tonight!! We are sleeping in front of the Government House. Someone must take responsibility! #AlutaContinua #EndSars,” Macaroni tweeted.

Top entertainers and social media influencers in the country like Peter and Paul Okoye of the defunct P-Square group; Wizkid, Davido, Burna Boy, Don Jazzy, AY, Bovi, Buchi, Segalink, Reno Omokri, among others have not only joined the protest but have also taken it upon themselves to support protesters with funds and legal interventions where necessary, especially in getting detained protesters released.

Nigerian rapper and YBNL boss, Olamide who is not in the country at the moment but felt the spirit of oneness in Nigerian youths, also threw in his support to the movement and wished he was around to also join the protests. “Tiwa, Run, Toke, Falz, Jaywon, Jamopyper and so many others. I even see my manager Shiii,n everybody don fall out on the #EndSARS matter. So sad I’m not in Nigeria at the moment to show my support but I’m with the people of Nigeria in spirit. Everyone who’s out there protesting I salute your bravery,” Olamide tweeted on Twitter.

Just as more celebrities have dedicated their platforms and time to support Nigerian youths in the protest against police brutality and the disbandment of SARS, the protests seem be unending as they haven’t ceased in major cities across the country, especially in Lagos, Ibadan, Jos and Abuja. The protests have become more popular as more celebrities continue to join and support protesters both online and physically, providing data for social media users, and offline, providing foods and medical assistance.

Even with the Inspector General of Police, Muhammed Adamu, announcing the disbandment of SARS; President Muhammadu Buhari also coming out to address the nation on the protests and the issue of police brutality in the country to the recent ban by the FCT Security Committee, on all #EndSARS street demonstration, protests in Abuja, Nigerian youths seem to be unrelenting as they have also started a movement against the proposed Special Weapons and Tactics Team (SWAT) formed to “fill the gap” arising from the disbandment of SARS.

Just as many of Nigerian celebrities have stated, the protest was no more about the brutality by the police but the frustrations of the ordinary Nigerian youth about the situation of the country. Actor, Alex Ekubo said during one of the protests in Lagos, “Nigerian youths are tired, and this protest is not just about police brutality, we are tired about the situation of this country. From this movement now, we are moving to electricity, minimum wage, since the labour union cannot do it, we the Nigerian youths are ready to fight for ourselves.”

Speaking at a protest march in London against police brutality in Nigeria, singer, Wizkid said: “As I speak to you right now, before coming here, the IGP in Nigeria has just disbanded SARS. So, Nigerian youths, don’t let anyone tell you you don’t have a voice, we all have a choice. Nigerians, we deserve good governance. Thank you all for coming out, we have achieved our goal and this is just the beginning, we won.” He tweeted on his official twitter handle and said: “Next election we show real power #EndpolicebrutalityinNigeria.”

Other Nigerian celebrities who have also been spotted on the streets of Lagos, London, Ibadan, Abuja, and some other parts of Nigeria and around the world, joining Nigerian youths in the protest against police brutality are Davido, Ruggedman, Toyin Abraham, Mc Lively, Kaffy, Sydney Talker, Nasty Black., Sean Dampte, Ayo Ajewole (Woli Agba) and many more.

Could this be the beginning of something great in Nigeria’s history? Time will definitely tell.

Bad producers are giving us a bad reputation —Tope Adebayo