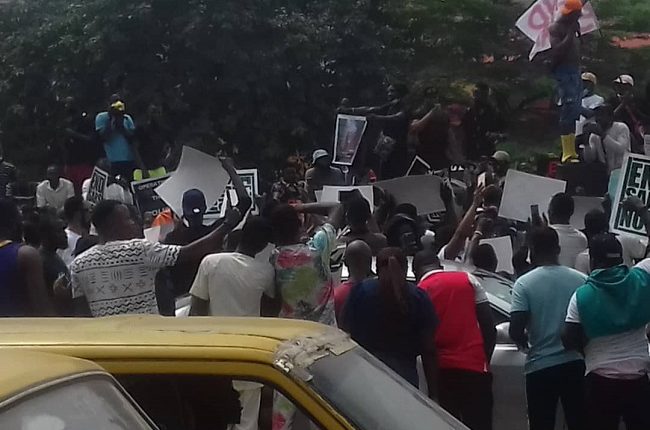 THE police have warned against any form of street protest in commemoration of the #EndSARS anniversary in the country.

As various civil society organisations made arrangements for street protests to commemorate the first anniversary of the incident in Lekki, Lagos State, during the #EndSARS protest on October 20, 2020, the police said they did not approve any such protest and, therefore, warned those planning such to desist.

A statement signed by the spokesperson of Lagos police command, Adekunle Ajisebutu, said that a post being circulated on social media, stating that the protest was earlier approved by the police, was false.

The statement, according to the News Agency of Nigeria (NAN), said the police would only allow an indoor or virtual event for the commemoration of the #EndSARS anniversary.

“We wish we could permit such street protests. However, intelligence at our disposal has revealed plans by some faceless groups or individuals to stage an anti-EndSARS anniversary protest in the state the same day.

“In view of the conflicting interests between the pro and anti-EndSARS anniversary groups and threat to cause mayhem, the command once again warns both groups against any form of street protest between now and October 21 and beyond,” it said.

“To avoid a recurrence of the gory protests of last year during which some innocent Nigerians, including police officers, were gruesomely murdered, private and public property plundered and maliciously destroyed, the police will not abdicate their responsibility of protection of lives and property by allowing such avoidable incident to happen again in the state,” it added.

It warned the organisers that the police would deploy all legitimate means to stop or neutralise the planned protests. In Osun State, the police command, in a statement by its spokesperson, Mrs Yemisi Opalola, said, “the intelligence that availed the police command revealed clandestine plans by hoodlums to cause problem in the state.”

Following the development, the state commissioner of police, on Tuesday, gave orders to area commanders, divisional police officers and tactical units to be at alert and nip in the bud any act capable of truncating the peace of the state.

“In view of this, the Commissioner of Police, Olawale Olokode, has warned individual or group of individuals that are planning such in the state and their sponsor(s) to stop the plan or any of such action(s) forthwith, as the command will not allow a repeat of last year’s #ENDSARS saga and is fully prepared to use all legitimate means to avert such intending protest.”

The police command in Oyo State warned that decisive action awaits anybody planning to wreak violence through the commemoration of one year anniversary of #EndSARS protest. It warned youths and other categories of individuals to desist from disrupting the peace in the state, saying it would use all legitimate means within the ambits of law to deal with violators.

A statement signed by the state Police Public Relations Officer (PPRO), Adewale Osifeso, said, “the police command, through intelligence availed to it, has unravelled clandestine plans by groups of misguided people to embark on large-scale violent protests in parts of the state in commemoration of one year anniversary of the unfortunate October ENDSARS saga.

“Consequent upon this, the Commissioner of Police, Oyo State Police Command, Ngozi Onadeko, is appealing to individuals, groups and most importantly architects of these sinister plans to have a rethink as the command would not hesitate to use any legitimate means necessary within the ambit of the law to enforce sanity and prevent needless loss of lives and wanton destruction of private and public properties, including critical government infrastructure which could emanate from the proposed protests.”

Against the warning on street protest, popular Nigerian rapper, Folarin Falana, popularly known as Falz, has directed Nigerians to participate in the #EndSARS memorial car procession taking place today. Falz, on his Instagram page, said there will be no protest, but a procession of Nigerians through the Lekki tollgate, in order to remember those who lost their lives on October 20, 2020 during the #EndSARS protest.

According to him, “it is im- possible not to ‘memorialise’ our fallen heroes. We will never ever forget that innocent Nigerian citizens waved flags and sang till they were shot at, injured and killed.

“We must never forget we are rolling up in cars tomorrow to drive through the tollgate. We know their way, so a procession of cars is the safest option to minimise police harassment.”

Speaking on the effects of the protests, the Ikeja branch of the Nigeria Bar Association (NBA) said one year after the #EndSARS protests, lawyers in Lagos were still reeling from its after-effects, notably the issue of burnt or missing case files. During the protest, the historic edifice and oldest judicial building in Nigeria, Igbosere High Court, was razed, with rebuilding of the court complex yet to commence.

Mr Bartholomew Aguegbodo, the NBA Ikeja branch chairman, said lawyers are still feeling the after-effects of the #EndSARS protest, adding that “there are a lot of hiccups caused by the burning of the courthouse, case files and exhibits during the #EndSARS crisis and some of those case files are yet to be recovered.

“It was just less than two months ago that alternative solutions were put in place for new courthouses in Yaba and Ikoyi areas of Lagos.

“We are still battling to grasp with the weight of the #EndSARS crisis up till now,” he said. The NBA chairman noted that following the arson attack, several lost records could not be retrieved because online e-filing system for the judiciary had not fully taken off.

Warning against any protest, former General Officer Commanding (GOC) 3rd Armoured Division of the Nigerian Army, Major-General Tajudeen Olanrewaju (retd), on Tuesday said recourse to violence is a harbinger of ruins and destruction. He stressed the need for youths and Nigerians in general to always embrace peace, saying violence and hostile atmosphere in any society hinders progress and socio-economic developments.

In a statement forwarded to Nigerian Tribune, Olanrewaju contended that there are indeed lessons to be learnt on both sides of the divide, a year after the EndSARS protests, which rocked major parts of the country.

He stated: “Personally, as one who has been part of the Nigerian journey both in times of peace and war, having served my nation at the echelon of my profession as GOC Third Armored Division and as a member of the Provisional Ruling Council, the most significant lesson to me is the unity of our nation and the issue of peace.”

Where will our miracle come from?

On nutrition and better health