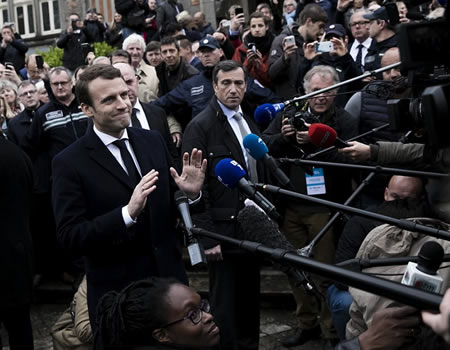 Emmanuel Macron, the passionately pro-European Union politician, has been elected as France’s youngest ever president with a projected landslide of 65.5 per cent.

An official preliminary result released at 8:00 p.m. France’s local time showed the 65.5 per cent vote for Mr Macron, meaning a clear victory over Le Pen, on 34.5 per cent.

Just 15 minutes after the exit polls were announced, Le Pen revealed she phoned Macron to ‘congratulate’ him on his election victory, Mail on Sunday said..

She had hoped that the surprise election of populist firebrand Donald Trump in United States, and the Brexit result in the United Kingdom (UK), would favour her hardline opposition to the EU, globalisation and immigration.

But instead it was Macron who was preparing for a victory celebration in front of crowds of supporters outside the Louvre in central Paris. Emmanuel Macron, 39, and his wife Brigitte, 64, were mobbed by fans as they went to vote at the polling station in Le Touquet this morning. Exit polls suggest he has won the election with 65.5 per cent of the vote. Emmanuel Macron waved to supporters as he left his home in Le Touquet flanked by bodyguards to go and vote Sunday morning. Macron supporters had gathered at the Carrousel du Louvre in Paris to celebrate the exit polls which showed he had won 65.5 per cent of the vote. A woman reacted with jubilation as the exit polls indicated that Macron had won 65.5 per cent of the vote in the tense election. French far-right presidential candidate Marine Le Pen reaveled this evening that she has phoned Emmanuel Macron to congratulate him.

Buhari jets out to London for medical consultation with doctors