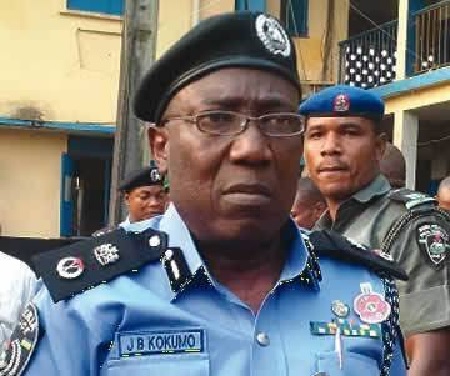 The Commissioner of Police, Edo State Command, Mr Babatunde Kokumo, has debunked the allegation making the rounds in the state that men of the Command killed two #EndSARS protesters in Ekpoma, Esan Central Local Government Area over the weekend.

The police authority equally disclaimed a video, which had gone viral in the social media in the state, alleging the shooting to death of the young men protesting in the town.

In a statement issued by the Edo State Police Command Public Relations Officer, PPRO, Chidi Nwabuzor, on Sunday explained that: “The Command wishes to state categorically that on the said date, October 8, 2020, at 12pm, some suspected hoodlums, under the pretence of the ongoing endSARS protests, numbering one hundred, armed with dangerous and offensive weapons, laid siege on the Police Station at Ekpoma. They attacked every police personnel on duty, destroyed facilities within the station and attempted to gain entrance into the main offices and armoury of the station before they were tactically and professionally repelled by the police with tear smoke.”

“It is pertinent to clarify that no single live ammunition was fired at the protesters let alone injuring or killing two of them as alleged. After the riotous protest, which was equally perceived as a planned attack on the station, nineteen (19) of the suspected hired miscreants were arrested while efforts are in top gear for their prosecution accordingly,” the statement added.

The Command advised the general public to regard the staged viral video and rumour of killing or attacking the protesters, describing it as “baseless, unfounded, and the handiwork of mischief makers to heat up the state.”

The statement emphasised that it would leave no stone unturned to uphold “the sanctity of the Constitution of the Federal Republic of Nigeria, the rule of law, ethics and Standard Operating Procedure of the Nigeria Police Force.”

“In the light of the above, the Commissioner of Police Edo State hereby appeals to the good people of the state to remain calm and support the Inspector-General of Police, IGP Mohammed Abubakar Adamu, NPM, mni, in his stride to reform and overhaul the policing system in Nigeria,” it pleaded

In a related development, the Command has arrested three suspects, a pregnant woman and two men, for armed robbery, during which the pregnant woman acted as bait by feigning to be in labour along the road while her accomplices pounced the would-be helper and robbed him.

The three suspects who were identified as Jumoke Akanbieme, the pregnant woman, Osagiede Izevbokun and Godfrey Okonide, were arrested when, their victim, who was said to be driving a Toyota car along Murtala Muhammed Way, Benin City, had stopped to help the pregnant woman.

The other accomplices were said to have come from their hiding place and forced the man to drive to Upper Sokponba Road of the state capital, where they collected the car from him.

Luck, however, ran out on them when while dismantling the car to dispose of it as spare parts, policemen from Ugbekun Division swooped on them and arrested the woman and her accomplices.

The Command PPRO, Nwabuzor, who confirmed the arrest said: “So many cars have been snatched by the syndicate in the same manner.”

Akanbieme, the pregnant woman, said that her man, who is on the run, lured her into the crime.