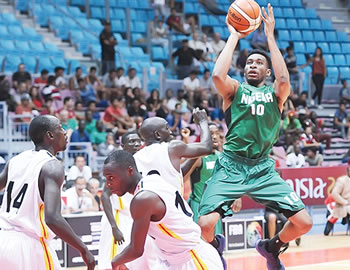 The Olympic basketball tournament will hold from August 6 to 21 in Brazil, while Africa’s other representatives to Rio 2016 men’s basketball are Angola and Senegal.

D’Tigers for the first time became the African champions last year under American trainer, William Voigt, following their victory over Angola, 74-65 at the 2015 AfroBasket championship in Tunisia, to book the Rio 2016 ticket.

According to the schedule released on Tuesday on the FIBA website, Nigeria drawn in group B will face Lithuania in its second game August 9 and Spain on August 11 at the Carioca Arena in Rio.

Nigeria ranked 24th on the FIBA world rankings will battle with Croatia on August 13 and Brazil on August 15, in a tournament where all the top four teams from each group will then move to the knock-out stage.

It will be recalled, that Nigeria’s D’Tigers first participated at the Olympics at the  London 2012 Games, where the team, however, managed only one victory over fellow Africans Tunisia to finish 10th at the end of the event.

The current Nigerian team captained by Fatai Oyedeji also boasts Chamberlain Oguchi who finished as Most Valuable Player at the 2015 AfroBasket as well as Olaseni Lawal, Al-Farouq Aminu, Ben Uzoh, Alade Aminu and Andy Ogide, among others.