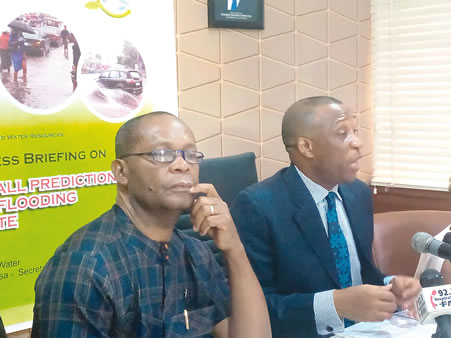 Lagos State Commissioner for Environment and Water Resources, Mr Tunji Bello, has asked residents not to be alarmed over flash-floods when they occur in the state. He said that such is natural for a coastal city like Lagos, and assured that such inundation will disappear in a short while

He said this at press briefing on the Year 2020 Seasonal Rainfall Predictions and prevention of flooding in the state in his office at Alausa.

The commissioner mentioned that the state will witness a near-normal rainfall of between 240 to 270 days this year.

He said this year’s prediction by Nigerian Meteorological services (NIMET) is based on the global consensus that El-Nino Southern Oscillation (ENSO) is at the neutral phase which will continue till around August or September.

Bello disclosed that the predictions of the Agency were valuable as vital weather and early warning tools for planners, decision makers and operators of the various sectors and businesses that might be impacted by the annual rainfall, if not well managed.

Re-assuring Lagosians on the issue of floods, Bello said in a coastal area like Lagos, it is natural that, “sometimes when it rains, we are likely to have flash-floods on our roads as normal occurrences all over the world.

“As long as the drains are clean, we should be assured that, in a matter of time, the flash flood will disappear.”

According to him, it is only when flood remains on the roads for days that we can report that the place is flooded.

“It must be noted that, anytime the Lagoon level rises, it may “lock up” the discharge points drainage channels and until it recedes, there will be no discharge. Occurrences like these also cause backflows, resulting to flooding,” he emphasised.

But as soon as the Lagoon recedes, all the generated storm water will immediately discharge and our roads will be free.

He disclosed, “The Lagos State Government has established synergy and partnership with Ogun-Osun River Basin Authority and this has ensured control and monitoring of the steady and systematic release of water from Oyan Dam to prevent flooding of the downstream communities;

According to him, since last year the Emergency Flood Abatement Gang under Drainage Maintenance Department of the Ministry have been consistently de-silting and working on secondary collectors and conduits, to enable them discharge efficiently.

He remarked that all relevant security and emergency agencies would be adequately informed to be ever ready for any negative effects of flooding.

“All emergency agencies, traffic management agencies and other emergency related outfits will be put on the alert to assist in reducing the havoc that may arise from the incidents of flooding in the state.”

Bello advised Lagosians who reside along flood plains, coastal and low-lying wetland areas near major rivers to always be on the alert and be ready to relocate, when the need arises.

He maintained that government shall, as usual, notify such residents at the appropriate time. He also urged motorists to observe prescribed speed limits during the rainy reason, to avoid loss of lives and property.

The environment commissioner appealed to Lagosians to desist from acts that can lead to flooding, indiscriminate dumping of refuse in unauthorised places.

Bello assured that the contact of Drainage Resident Engineers will be made available in all our 57 Local Governments Areas and Local Council Development Areas to attend to the  needs of residents before, during and after the rainy season.

Also speaking at the briefing, the Special Adviser on Drainage and Water Resources, Joe Igbokwe said the government is working seriously with the all the Local Governments to sensitize market men and women saying that the government will not hesitate to shut down any erring market.

Igbokwe also noted that there has been a rise in population and government will not relent in performing its responsibilities of maintaining cleanliness in the environment stressing that work is seriously going on to clear canals and drains in Oshodi, Isolo, Mushin, Ladipo amongst others.

He enjoined the people of Lagos to support   government efforts by complementing through regular clearing of drains in their frontages to ensure free-flow of storm water as well as to desist from dumping of refuse into drainage channels and roads.

Maritime workers threaten to shut down operation at ports

Will this APC crisis end?