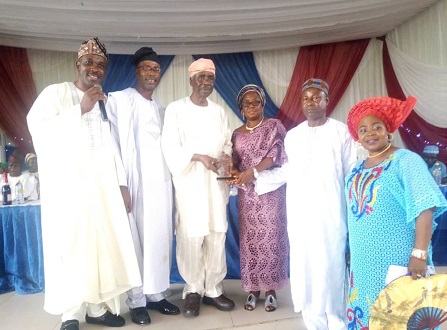 Professor Richard Olaniyan of the Obafemi Awolowo University, Ile-Ife topped the list of personalities bestowed with awards of excellence by the Old Students Association of the Muslim Grammar School, Osogbo, last weekend at the Osun State capital.

At the 40th anniversary of the school, other recipients of the awards were the people who played a key role in the foundation of the first secondary school funded by the Osogbo Muslim community in 1979.

As the guest lecturer of the event, held at the Fountain University, Oke-Osun, Osogbo, Professor Olaniyan congratulated members of the old students association and wished them God’s kindness in all their respective endeavours.

In his lecture titled ‘Nigeria’s Educational Development: Role of Alumni Association’, the professor argued that successes of the alumni advertise their colleges better than physical structures and facilities.

He described the education system as important critical infrastructure that must function effectively if the nation is desirous of survival in a globalized world, saying however that Nigeria has a long way to go.

“According to the National Universities Commission (NUC), Nigeria presently has a total of 174 Universities comprising 43 Federal, 52 State and 79 Private Universities, making it one of the largest higher education systems on the continent. Of this number, however, only two are ranked in the top 100, according to the 2019 Times Higher Education World University Rankings. These are Covenant University and the University of Ibadan,” he said.

A Principal of the school, Alhaji Ajadi Badmus expressed his delight at the efforts of the old students to organize the anniversary, urging them to prepare for more roles in giving back to their alma mater.

The event witnessed two cultural performances by the students and election of the new executive of the association during which an Assistant Editor of Tribune Titles, Tunde Busari unanimously emerged as president of the association.

Earlier, the old students held motivational talks with students after which they observed Jummah prayer at the Osogbo Central Mosque and visited the palace of the Ataoja of Osogbo, Oba Jimoh Oyetunji Olanipekun and Principal Emeritus, Alhaji Badmus at the GRA, Osogbo.