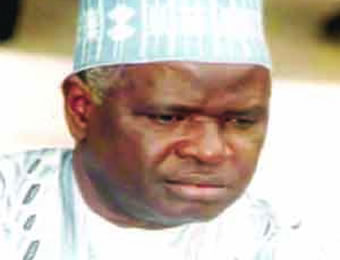 President Muhammadu Buhari has described the death of the late Marafan Sokoto, Alhaji Umaru Shinkafi, as “a colossal loss to Nigeria.’’

Buhari made the remark on Friday in Sokoto in his condolence message to the Sultan of Sokoto, Alhaji Sa’ad Abubakar III, the people and governments of Sokoto and Zamfara States.

The president was represented at the burial of the late politician by the Defence Minister, Lt.-Gen. Abdulrahman Danbazau (rtd), who led a seven-man delegation from the presidency.

Buhari said, “His (Shinkafi’s) demise is not only a loss to his family, Sokoto and Zamfara states, but to the entire nation.”

While praying for the repose of the soul of the elder statesman, the president prayed that Allah should grant his family the fortitude to bear the irreparable loss.

The Sultan commended the president for sending a high powered delegation to represent him at the burial.

He lauded the governors of Sokoto, Zamfara and Kebbi states for their concern and the action they took since the demise of the late Marafa on Thursday.

Gov. Aminu Tambuwal of Sokoto State described the death of the Shinkafi as as a national loss

Gov. AbdulAziz Yari of Zamfara led a special prayer for the repose of the soul of the late Marafan Sokoto.