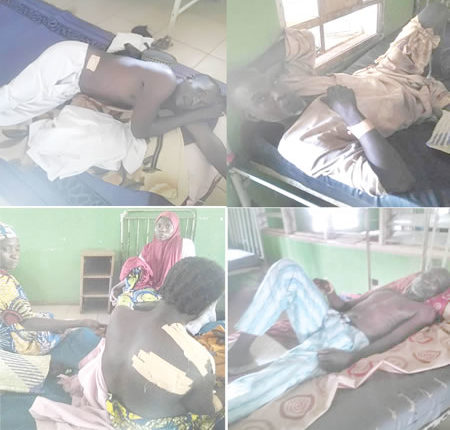 MARUF OLAKUNLE reports that the serene village of Dangara in Sokoto State was thrown into chaos when bandits invaded their community killing about 22 people and leaving several others injured after operating for about three hours unhindered.

THE first day of the month of April is generally known across the world as All Fools Day. It was a day when people play pranks on others and laugh at the result. For indigenes of Dangara village in Sabon Birni Local Government area of Sokoto State, what happened on that day was not a joke, neither was it a laughing matter.

Being an agrarian settlement where farming is the main occupation with some petty trading activities, Dangara is ordinarily a peaceful and serene community. But little did the inhabitants know on that day that tragedy was lurking around the corner and the serene atmosphere was going to be taken over by commotion.

The day had started peacefully for the residents until some minutes before the Muslim evening prayer (Asri prayer), at about 3.50 p.m., when things suddenly became awry.

A resident of the town, Ismaila Isa, who spoke to Arewa Live disclosed that more than 200 bandits invaded the community on motorcycles to unleash terror. He explained that the bandits headed straight to the market and started shooting everyone on sight.

According to Ismaila, “Many people were killed in the process and scores were also injured with bullet wounds during the attack. Each of the motorcycles brought by the bandits conveyed three people. All were fully armed and operated for close to three hours unhindered.

“After the killings, they succeeded in burning our houses and shops in the town. They also rustled our animals and went away with our foodstuffs.”

Also speaking to Arewa Live, one of the victims who survived the attack, Umar Nuhu, a 50-year-old man who spoke on his hospital bed disclosed that about 22 persons were killed while 14 others were injured.

According to Nuhu, “they entered our town at about few minutes to 4 p.m. and spent close to three hours operating there,” adding that “four of the injured persons were rushed down to the orthopaedic hospital in Wamakko Local Government Area for proper medical attention as their case could not be handled at the General Hospital.”

Also speaking, another resident of the village, Hajia Labatu Bello, confirmed to Arewa Live that the incident was the first attack she had ever experienced after several attempts by the bandits to enter the community.

According to her, «these people have been trying to cause such a calamity in this community but they never succeeded until this time. This is the first time ever and it ended in a very sorrowful and regrettable manner.

“It was a sad experience when you wake up with friends, pray the morning prayer with them; same for afternoon prayer and while preparing for the 4 o’clock prayer, all you can remember is that some people entered and started shooting everyone on sight until you wake up and meet yourself in the hospital.

“Friends, wives, husbands and children are gone. Houses were razed, shops were raided and set on fire. Animals were rustled and many other things. One can only imagine the pain and sorrow.

“One can only appeal to government and the security agencies not to let these bandits turn our community into a ghost town in the future.”

Also speaking, Alhaji Garba Suleiman, a philanthropist and retired civil servant who paid for the hospital bills of the injured victims, told Arewa Live: «I spoke to the chairman of the local government and he promised to offset the bills but in the main time, I am here for my people. I counted about twenty-one (21) bodies myself before we rushed those injured to the hospital in Isa Local Government Area here.

“I call on other well-meaning Nigerians, especially those that live on the Sabon-Birni-Isa axis to come to the aid of these people. We can›t leave everything for the government.

“They need our support. We have small children that are now orphans; women that suddenly became widows and men that are now widowers due to these senseless attacks.

Imagine bandits attacking a community and operating for close to three hours without hindrance in this country. I think we need to restrategise on how best to secure this nation.”

Meanwhile, one of the victims who survived the attack with bullet wounds, Abubakar Sani, described the killings, arson and looting perpetrated by the bandits as the height of wickedness.

According to Sani, “I lost all I have to these attacks and if not for a Good Samaritan who helped me, maybe I would have died now due to the injuries I sustained. Those people will not live to enjoy the fruits of their labour,” he cursed.

Sani, who became emotional during the interview, however, appealed to the government to urgently help the affected persons.

“Let me use this ample opportunity to appeal to government at all levels to come to our aid by providing relief materials for the people in this community. Our major source of income which is farming has been destroyed. Our markets were razed and our properties were looted. We have accepted our fate on what happened. Our prayer is Allah’s forgiveness for the departed souls.”

He described the killings as the height of wickedness while calling on security agencies to rise up and be counted for the job they are meant to do.

The senator who spoke during a live interview on a local radio in Sokoto monitored by Arewa Live said: “I still don’t know what they came here to do sincerely. These my people in Dangara village are not rich, they are farmers trying to keep body and soul together and some people just entered and killed over 20 of them just like that?”

Gebir lamented the incapacity of law enforcement agents to protect the citizens, especially their lack of necessary weapons to combat the criminals.

“Imagine how they operated freely without anyone stopping them. When I was informed that they were terrorising them, I called a Major I know is leading a team in Isa Local Government Area about the development and he promised to send his men there.

“What baffles me most is that, can the government claim that we don›t have the money to equip our security men? Are they saying we can›t afford to place helicopters in the local government areas prone to attack like Sabon Birni, Isa, Gada and even Goronyo local governments. I believe that will definitely increase the security architecture of the country by so doing. I blame the government for the insecurities in the land.

“If they say citizens should not carry arms and some useless bandits come to attack you with guns. If not with guns, what will make them have confidence to attack and kill. If it is all about cutlass, the casualty will be shared between the bandits and the residents but government still has not approved the citizens of the country to carry arms for self-defence,” the lawmaker had stated.

The residents of Dangara, meanwhile are still bemoaning their fate awaiting when if ever, respite would come their way.