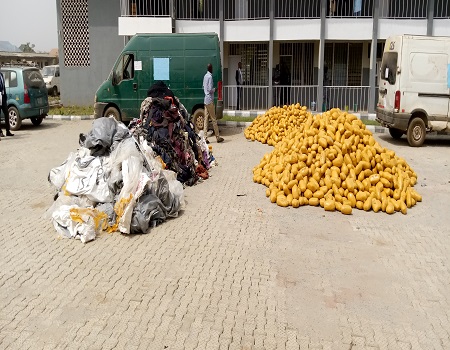 Speaking with journalists on activities of the command in the state in the last four months in Ilorin on Wednesday, the Customs’ Area Controller, Hussein Ahmed, said that the seizure was made along the Bukuru-Budo Aiki border town in the Baruten local government area of the state through intelligence gathering and information from people.

The customs boss, who said the men of the command had been on surveillance for two months before the seizure was made a few days ago, added that no arrest of offenders was made as they bolted away on sighting his men.

He said the drugs substance was concealed in loads of mutilated rags of clothes to make the smell of the substance difficult for men of the command, “until our men stopped them and discovered the substance inside the lorry used for smuggling, a DAF truck, with registration number YOBE FUN 89 XA.

“The cat was let out of the bag as suspects involved in the act fled into the bush and ran away to evade arrest by men of the command during the operation”.

“In the area of anti-smuggling within the period, the command made 47 seizures comprising of the items below:

16 units of vehicles of various types

“Please note that of interest is the seizure of 48 sacks of 3,593Kg of Cannabis Sativa (otherwise called Marijuana). You are not un-aware of reported widespread abuse on the substance across the country by our teeming youths. This act is unfortunate and we at Kwara Command will continue to do everything humanly possible to stop the smuggling of the substance in order to guarantee a great and promising future for our youths.

“These people are our children and they are Nigerians. You are Nigerians and we are all Nigerians. So, we must join hands together to deal with the ugly trend”, he said.

He also said that the drugs substance would be handed over to the officers of the NDLEA after the parade.

Ahmed, who called on well-meaning Nigerians to continue to give useful information that could be of assistance to the command in discharging of its duties, said the gesture would go a long way at riding the society of activities of smugglers in the country.

The Customs boss, who said that hard drugs could ruin a whole society, added that users of the drugs are Nigerians and children of some people who in turn engage in such criminality as rape, robbery, kidnapping, etc.

You do not build a megacity by hiding the poor