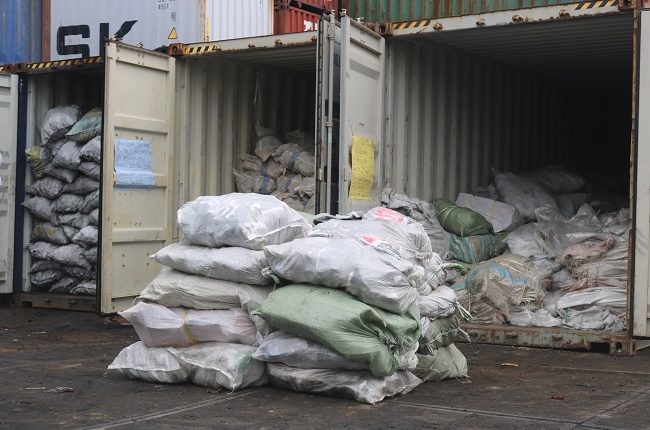 Operatives of the Comptroller General of Customs Strike Force, zone A, have intercepted N643.73 billion worth of poisonous Donkey hides and skin, charcoal and wood already positioned for export in Lagos port.

All the seizures were already stored in a warehouse in Apapa and were on the verge of being moved into the port for export when it was intercepted.

Showcasing the seizures on Wednesday at the Nigeria Customs Export terminal, in Ikorodu, the Controller CGC Strike Force, zone A, Ahmadu Shuaibu, said the seized items were discovered stacked in a warehouse not too far from Apapa port and that those behind the illegal storage took to their heels on sighting the Customs team.

Shuaibu revealed that the seizures would have been exported, but for the concerted and deliberate efforts of officers and men of the unit.

He insisted that effort was ongoing to ensure that all those behind the stockpiling of the seizures are brought to book.
He said the export prohibition guideline is in tandem with the Federal Government’s policies for the protection of endangered species, protection of the local economy and to promote the National Forest Policy that was approved by the Federal Executive Council, which according to him, is aimed at greatly assisting the nation’s sustainable management of its vast forest resources against deforestation.

“For the period of the time the Co-ordinator took over the mantle of leadership of the team, the sum of N3,001,226,794 was collected as revenue through the issuance of demand notices. This feat was achieved through meticulous documentary checks of the ICT Component,” he said.

Reacting to an alleged attempt by smugglers to cash in on the ‘mber’ months to flood the nation’s market with smuggled items, Shuibu said more men have been deployed to police the country’s waters and land borders.

In spite of the huge investment in the water sector by the government and international organisations, water scarcity has grown to become a perennial nightmare for residents of Abeokuta, the Ogun State capital. This report x-rays the lives and experiences of residents in getting clean, potable and affordable water amidst the surge of COVID-19 cases in the state…Customs intercept N643.73bn  Customs intercept N643.73bn