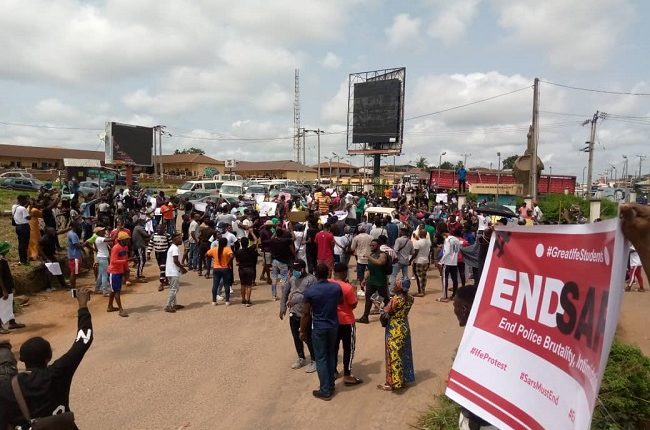 The Federal Government should desist from its clampdown on the identified promoters of the recent #EndSARS protests in order to create a conducive atmosphere for meaningful and fruitful dialogue with the aggrieved youths, the Yoruba Leadership and Peace Initiative (TYLPI) has counselled.

The TYLPI, a think tank and socio-cultural group of Yoruba intellectuals, professionals and entrepreneurs made the appeal in a 17-point communique issued at the end of its expanded management committee meeting in Ibadan.

In the communique signed by its President, Mr Olusegun Ahmadu and General Secretary, Mr Femi Adefemiwa, the group said lifting the embargo on the bank accounts of the promoters of the #EndSARS protests and removing the travel ban imposed on some of them would demonstrate good faith on the part of the government and engender confidence in the youths to come into dialogue without fear of intimidation.

The TYLPI expressed regret that what started as peaceful protests turned violent, resulting in avoidable loss of lives and the destruction of public and private property in parts of the country and urged the government to take urgent and non-cosmetic steps to address the demands of the protesting youths.

The TYLPI noted that apart from the threat to life and property, such activities posed a great disincentive to investment and development and urged the government to take necessary steps to restore law and order in the country.

The group also expressed dismay that since 2015, appointments into strategic national agencies had been skewed in favour of persons from a particular section of the country in violation of the provisions of the Constitution and called on the government to take swift action to redress the situation in order to give all Nigerians a sense of belonging.

It promised to adopt a credible and evidence-based approach to pursue the redress of the violations of the federal character principle in appointments into government agencies and in determining the location of strategic infrastructure and institutional projects in the country.

The TYLPI expressed its commitment to the emergence of a strong, self-reliant, just and equitable nation and urged the Federal Government to facilitate the process of devolution of powers to the nation’s federating units before the 2023 general elections.

Such step, it emphasized, would enhance healthy competition among the units and create room for each of them to explore the areas of its comparative advantage to develop at its own pace.

The group noted that the 2014 National Constitutional Conference made wide-ranging recommendations that could effectively address the nation’s problems and called on the government to take practical steps to implement the relevant sections of the report of the conference.

The TYLPI also called on the executive and legislative arms of the government to expedite action on the enactment of a new Electoral Act based substantially on the Uwais Committee Report.

It also advised the government to re-orientate the security agencies and other institutions involved in the electoral process as well as implement the report of the Nasir El-Rufai Committee on federalism set up by the ruling All Progressives Congress (APC), which it said aligned with the report of the 2014 Constitutional Conference.