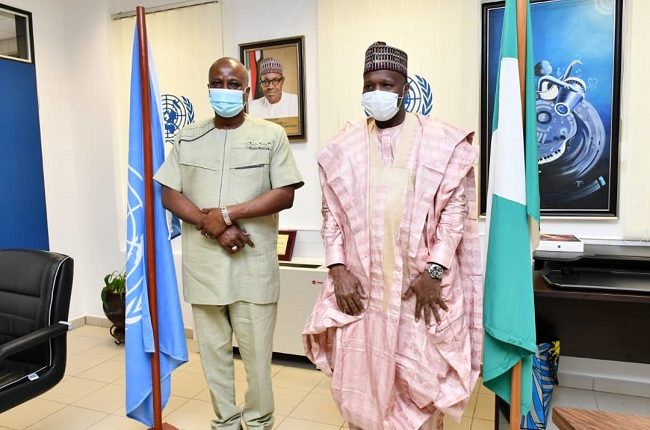 The United Nations resident and humanitarian coordinator in Nigeria, Mr Edward Kallon, has assured Gombe State governor, Muhammadu Inuwa Yahaya, of the UN’s support to the state in its quest to strengthen its social safety net as part of its post-COVID-19 plans.

The UN representative in Nigeria gave the assurance when the governor paid him a courtesy visit at the UN House in Abuja noting that the imposed restrictions, temporary closure of schools, markets and other establishments have impacted on the markets and left those in the informal sector as well as many households in immediate economic setbacks.

Because of the negative impacts according to him, there is the need to come up with strategies to utilise the social protection system that will be adaptive and resilient to shocks as a measure to respond to socio-economic implications at the household level and stabilise the economy.

Mr Edward Kallon also said that “these are difficult times for the leaders. And until we find a convergence between fiscal and monetary policy, we are in a fix”.

He added, “On our part, however, we are trying to do our best to help. We have established a COVID-19 Basket Fund to complement ongoing efforts to mobilise resources in support of Government’s Multi-Sectoral Pandemic Response Plan. We have so far mobilised about 61 million US Dollars”.

The UN Envoy further said, “And we have been so open about it. The budget proposals were thoroughly debated by a technical committee.  We are now putting a procurement of essential medicines and drugs to the tune of about 33 million US Dollars which will be distributed to cover not only the federal authority but also states, including Gombe”.

The UN Resident Coordinator also said that the distribution list will be made available to the governors so that they will hold those responsible for the distribution accountable and said that, Gombe is one of UN’s priority states, as such will benefit from the intervention and many other programmes being reeled out by the global body.

Speaking earlier, Inuwa Yahaya had sought the UN’s support in his administration’s efforts to mitigate the socio-economic impact of the global pandemic of Covid-19 as contained in a statement by Senior Special Assistant on Media and Publicity to the Governor, Ismailla Uba Misilli.

He said that although the pandemic exposed the weakness of the country’s health system, in Gombe state it served as a challenge to rejig the public health sector for effective service delivery.

The governor also said that being an area of priority, the health sector has received remarkable attention in Gombe State with about 80 per cent of the primary healthcare centres revitalised while Gombe Specialist Hospital upgraded.

The governor said that even before recording any case of COVID-19, Gombe State government took proactive measures by constituting a task force made up of highly experienced public health experts, establishing isolation and fully equipped treatment centres, adding that the state has also procured a PCR machine for its soon to be inaugurated testing centre among other strategies to curtail the spread of disease.

He added that said with the obvious socio-economic impact occasioned by the consequential restrictions and measures put in place, his administration is seeking closer collaboration and support from the UN and other development partners and agencies in its social protection agenda and other post-covid-19 policy plans to stabilise the economy and protect the people.