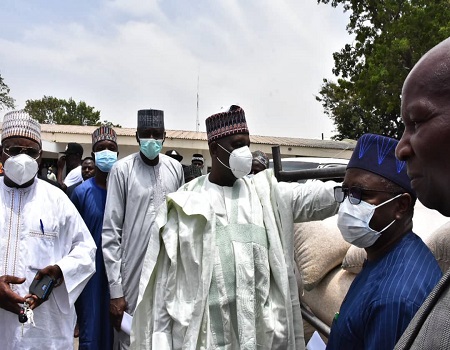 A Bauchi based NGO, Forward in Action for Education, Poverty and Malnutrition (FaCePam) has contributed the sum of N2.5m and food items worth over N1.5m to the COVID-19 fund purse of Bauchi State government to cushion the effects of the infection.

While presenting the cash and items to the state deputy governor, Sen Baba Tela at the government house on Monday, Director of the NGO, Mr Ado Solomon explained that the gesture was informed by the prudent management of the disease by the State government.

He further explained that as part of its social responsibility and community relations, FaCePam decided to extend hands of fellowship to the needy in the society particularly at this period of lockdown when people don’t have what to live on.

Ado Solomon added that considering the cardinal objectives of the NGO which is people-centred, it is not out of place to be part of what is presently ongoing in the state as a compliment from them expressing confidence that the items and cash contributed will augment efforts.

On why the NGO did not embark on the distribution itself, the FaCePam Director said that “you know it is a common purse so we decided to contribute to it hoping that government will get them across to the beneficiaries”.

While receiving the contribution, state deputy governor Sen Baba Tela who is Chairman of the State Rapid Response Taskforce on COVID-19 and Lassa fever commended the NGO for the donation saying that it will go a long way to augment what the government is doing.

Baba Tela assured that the items will be merged with the ones earlier donated by other organisations and individuals and thereafter decide on how to judiciously distribute them.

The items donated by FaCePam include bags of rice, maize, beans as well as Jerrycans of palm oil, red oil and other consumables.