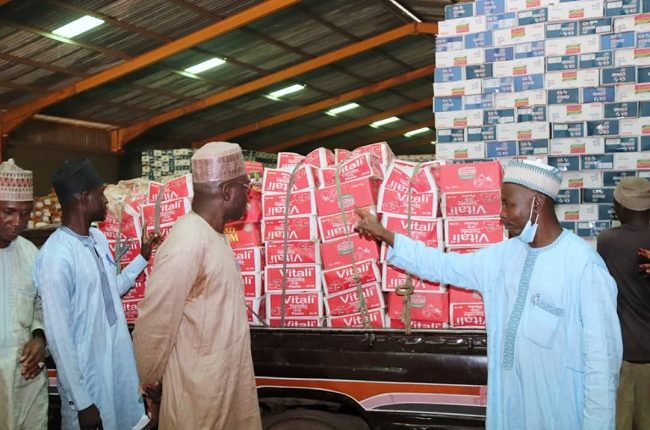 Commercial motorcycle riders, popularly called Achaba in Gombe State have received various relief items to cushion the negative socio-economic effects of COVID-19 restrictions and other safety measures on their members.

The items were distributed to the beneficiaries by the Gombe State government through its COVID-19 committee on palliative in continuation of the 2nd phase of distribution of palliatives to vulnerable groups in the state.

While presenting the relief items to the association’s leadership, a member of the state palliatives distribution Committee, Alhaji Ali Usman Ashaka, who led the exercise on behalf of the Chairman, Emir of Gombe, Alhaji Abubakar Shehu Abubakar III, charged the leadership to ensure judicious distribution of the items to all their members.

He said that the committee found the association worthy of the gesture considering the vulnerability of its membership in one way or the other, occasioned by the negative impact of the COVID-19 on their operations.

Ali Ashaka affirmed that the state governor, Muhammadu Inuwa Yahaya, is passionate in supporting the needy and vulnerable, assuring that such gesture will continue as long as the COVID-19 pandemic lasts.

He also commended the governor’s commitment to taking measures to curtail the spread of COVID-19 in the state.

While receiving the relief items on behalf of his members, Chairman of the Gombe State chapter of National Association Tricycles and Motorcycles Owners and Riders, Malam Hassan Ahmad, said that he will ensure that the targeted vulnerable amongst them benefitted from the government’s gesture.

He thanked Gombe State government for including their association among the targeted beneficiaries, saying that such will bring succour to them.

Malam Hassan who charged his members to be obedient to constituted authorities also called on them to continue to abide by rules and guidelines put in place to combat the spread of COVID-19.

Items presented to the commercial motorcycle riders include 97 bags of rice, 200 bags of sugar, 500 cartons of tomato paste, 64 bags of maize and 10 jerricans of vegetable oil as contained in a statement by Ismaila Uba Misilli, Senior Special Assistant, Media and Publicity to the governor.