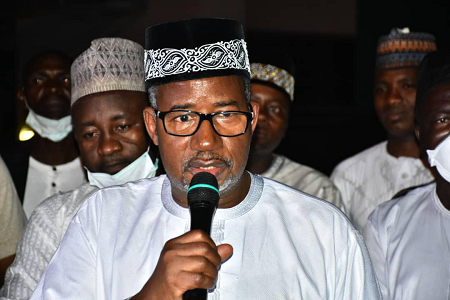 After testing positive to COVID-19 infection and receiving treatment for about three weeks, Bauchi State Governor, Senator Bala Mohammed, has been discharged and given a clean bill of health by the Nigeria Centre for Disease Control (NCDC).

Speaking shortly after he was discharged on Thursday night at about 9 pm, an elated Bala Mohammed declared that, “I went through hell while in isolation for treatment. I felt like I was alone. But the love, affection and prayers shown to me by the people of Bauchi State really kept me going.”

The governor who thanked the people of Bauchi State for standing by him all through the trying period said that, “I cannot hide my health status, but if by doing so I have offended anyone, I apologize for that. It was really a trying time for me. Glory to God that I was able to pass the test.”

He also said that, “the situation was made worse with the kidnap of my elder brother but we thank God for his release. I have learnt a great lesson during this period and it has further strengthened me and souring me to do more for the people of Bauchi State.”

Bala Mohammed, however, called on people of the state not to come to his office or Government House for sympathy visit saying, “Because of the social distancing practice directive, I appeal to our supporters to stay at home and continue to pray for divine intervention on the situation.”

It will be recalled that the second and final sample test of the governor came out negative on Thursday, a development that was received with excitement by people of the state.

Let’s Be Fervent In Our Prayer For Divine Intervention —Lawan
THE Senate president, Ahmed Lawan has said that Easter is more relevant now that makind is passing through one of the darkest times in history… Read full article