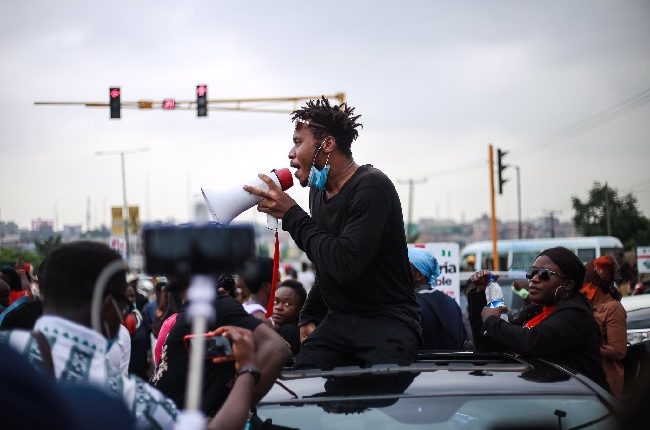 The Magistrate Court of Lagos State has granted #EndSARS promoter, Eromoesele Adene, N1m bail and rejected the request of the State’s Commissioner of Police to remand him for 30 days over alleged provoking breach of public peace.

The Chief Magistrate, Mrs Folarin Williams, granted Eromoesele bail with the conditions of two sureties having not less than a million in their accounts and tax-compliant.

Earlier in the court’s proceeding, Counsel to the Defendant, Mr Ogunlana Folarin, described the application of the Commissioner of Police to remand Mr Eromoesele as deprivation of his constitutional right.

Folarin stated that the facts presented are not weighty enough as proper and adequate investigation ought to have been carried out by the institution before carrying out any arrest.

The Lawyer explained that the Police did not state that the accused was calling for riot nor insurrection but a peaceful protest which is his constitutional right.

He said that the Police should be investigating armed robbers or kidnappers rather than molesting citizens and hence, urged the court to dismiss the application as unmeritorious as the judiciary is being seen as the bastion or the freedom of the people.

“We are praying this Honourable Court to grant our demand.

“The essence of the application is to deprive the defendant his constitutional right enshrined by the freedom of movement.

“Such an application is not persuasive and has no materials and data to present before the court to persuade the court of law to accede to such a request.

“Facts are not weighty enough to support the ground at which they arrested the defendant.

“Demanding for a 30 days remand of the defendant is trying to overreach not only the court of law but the justice system of the country.

“It is a different thing if this application is coming ten days ago but this gentleman had been with them from Lagos to Abuja.

“The court is the bastion or the freedom of the people. This application should be rejected and found unmeritorious. They are supposed to be investigating armed robbery or kidnapping not molesting citizens of the country.

“The Constitution states that the court has the right to grant bail. Our hope as Nigerians vis-a-vis government lies here.

“Deny them application because the action is unmeritorious but I am not also saying that the defendant should be allowed to go home just like that,” Mr Folarin said.

Meanwhile, the Plaintiff’s Counsel, Mr O. Adegoke, said that the Defendant’s right was not deliberately infringed upon but for the interest of the state.

Adegoke explained that the institution was trying to avoid a situation where the security of the nation will be threatened.

He added that efforts would be exerted to ensure that he enjoys all the rights the constitution allows him.

“We did not just deliberately infringe upon the fundamental right of the defendant but for the interest of the state.

“We will continue to provide him with all the rights the constitution guarantees him.

“We are trying to avoid a situation where the security of the nation will be threatened,” the Counsel said.