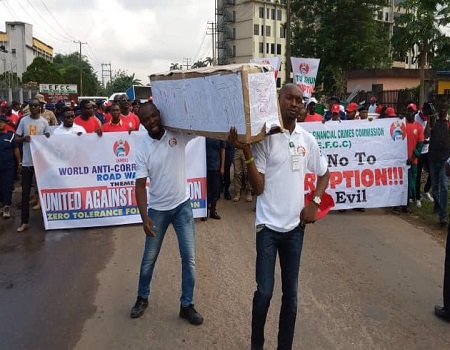 The Benin Zonal Office of the Economic and Financial Crimes Commission (EFCC) has recovered about N217,268,236 million between January and December.

Mr Mukhtar Bello, Head, Benin Zonal Office disclosed this on the occasion of the World Anti-Corruption Day held in Benin on Monday.

Bello also said that the zonal office also secured 84 convictions and forfeiture of various properties including houses and vessels.

He stressed that the zonal office was determined to win the fight against corruption through its preventive measures, diligent investigation and prosecution.

Bello explained that as part of its preventive measures, the office took sensitisation campaign to members of the NYSC, secondary schools and higher institutions in the zone.

“The EFCC recognises the fact that it could not win the fight against corruption alone, we need the support of all stakeholders to make meaningful progress in restoring transparency, accountability and due process in public governance.

“The 2019 celebration theme “United Against Corruption and the sub theme “Zero Tolerance for Corruption’’, underscores the need for all to come together and raise awareness on the ills of corruption,’’ he said.

Meanwhile, Rev. Phil Arojie, who represented the Pentecostal Fellowship of Nigeria (PFN) and the Christian Association of Nigeria (CAN), Edo chapter, said there was the need to drum support for the fight against corruption.

Arojie said that the anti-corruption war was one that must be continued to defeat corruption as the scourge had become endemic in the country.

Similarly, Sheik Abdulfatai Enabulele, Chief Imam of Benin Central Mosque, said that the need to come together and fight corruption and insecurity could not be overemphasized.

He stressed the need for citizens to be honest, sincere and collaborate with the EFCC to fight and win the war against corruption.

News Agency of Nigeria (NAN) reports that the Head of the zone earlier led stakeholders including members of the DSS, Police, FRSC, NSCDC, Civil Society Organisation, NYSC, Religious Organisation on a road walk round major roads and streets in Benin.