Confession of an arms seller: I get N5,000 commission on every gun I sell 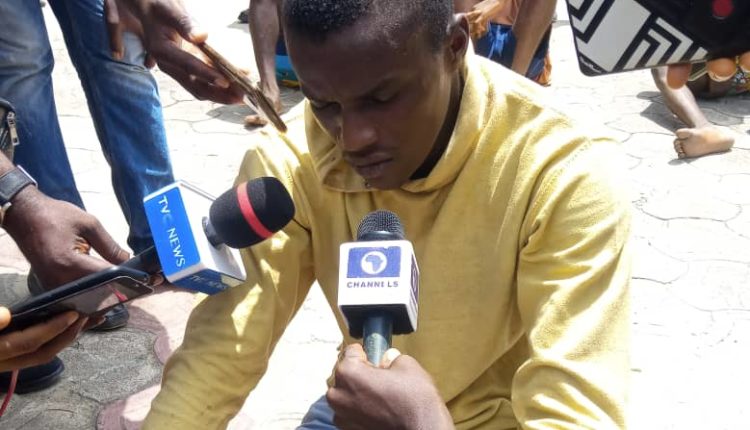 A suspected seller of guns identified as Mr. Nwoka Obiora has given details of how he used to get N5,000 commission on every gun he sold given to him by his sponsors, fabricators and others in Bayelsa State.

Obiora, who had earlier stated that he was from Agudama Ekpetiama community in Yenagoa, was however recognised by a police officer as a man who escaped from jail some months ago in Yenagoa, the state capital.

The police officer who revealed his true identity and gave the man’s name as Obiora Nwoka, from Abia State, also added that he was part of a criminal gang that were arrested some months ago.

Obiora, who didn’t deny the revelation from the police officer, claimed that he was into arms sales because he didn’t want to use the guns to rob.

He said: “I sell guns at N20,000 each and a get commission of N5,000 on each gun I sell. I just started not quiet long and I have sold only six since I started. I don’t know the people I sell to because I am just a distributor. They are locally-made pistols and I don’t manufacture.

“I am into the sale of guns business because I don’t like using the guns to rob people. I am from Agudama Ekpetiama community in Yenagoa Local Government Area.

Briefing newsmen at the state Police Headquarters in Yenagoa, the Commissioner of Police, Nkereuwem Apkan, said the suspects were arrested while conducting raids on criminal flashpoints during the COVID-19 lockdown.

Explaining further, he said “on 9th May, 2020, one Ebi Collins, Emmanuel Benson and Monday Nweke were arrested while robbing one Peter Ebikabowei at a POS stand opposite the Yenagoa Council Secretary.

“A police officer who was at the scene to withdraw money suspected their movement and alerted passers-by, who assisted in arresting the suspects. The sum of N222,000, two locally-made pistol and two expended cartridges were recovered from the suspects.

“On 26 April, 2020, one Mrs. Eyi Timinepre from Tungbabiri Community in Sagbama LGA was robbed of the sum of N550,000, two Tecno phones valued at N84,000 in her apartment at gunpoint by one Peremobowei Eyitimbia, 33 years, Johnson Etete, 22 years, and Prosper Awara, 20 years.

“The said suspects were arrested and the sum of N160,000 and one Tecno phone were recovered from Peremobowei Eyitimbia. Investigation is ongoing. On 5th May, 2020, the vigilante men along INEC street, Kpansia, suspected one Dominic Kingsley, searcher him and recovered one locally-made pistol. He confessed to be a member of Bobos cult group.”

“Everything she said is true,” says CAC pastor accused of impregnating…