CLCC drags FG to court over retention of service chiefs 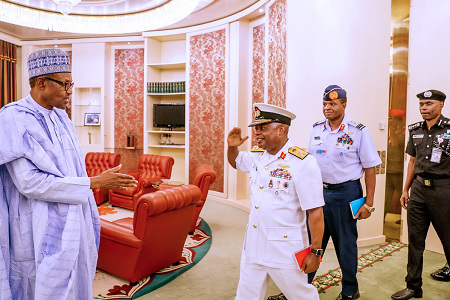 The Centre for Law and Civil Culture (CLCC) has filed a suit against the Federal Government following the government’s refusal to accede to its requests on continued retention of the service chiefs in office, asking the court to declare as illegal their continued stay in office.

The suit which was filed pursuant to Section 20 of the Freedom of Information Act And Order 34 Rules 1, 3(1), 2 And (6)(B) of the Federal High Court (Civil Procedure) Rules 2009 and the Court’s Inherent jurisdiction is seeking for an order of mandamus to compel the President of the Federal Republic of Nigeria to accede to its freedom of information’s request seeking to know the propriety and /or otherwise of the elongations of years of service of the service chiefs.

Also in the suit which has the Attorney General of Federation and Minister of Justice as co-respondents, CLCC is praying for “a declaration that the refusal and failure of the respondents to respond to the applicant’s freedom of information request dated 23rd  September 2020 on the legality or otherwise of the continued retention of the Chief of Defense Staff, Major-General Abayomi Gabriel Olonishakin; Chief of Army Staff – Major General T.Y Buratai, Chief of Air Force – Air Vice Marshal Sadique Abubakar and Chief of Naval Staff  – Real Admiral Ibok – Ete Ekwas Ibas, when it is obvious that their years of service in the Armed Forces had expired is a gross violation of the Freedom of Information Request,(Act) 2011.”

It also asked for an order declaring vacant, the position of the Chief of Defense Staff, Chief of Army Staff, Chief of Air Force and Chief of Naval Staff of the Federal Republic of Nigeria since the years of services of the present occupants of the respective offices have come to an end by effluxion of time.

CLCC had in a Freedom of Information (FoI) dated September 23, 2020 jointly signed by its Executive Secretary, Abdulganeey Imran and the Deputy Legal Adviser, Oyinkansola Ngozi Chukwu, given the AGF 14 days to provide information on the legality of tenure extension of Service Chiefs.

After the expiration of the 14 days and without a response from the Federal government, CLCC through its counsel, Abdulganeey Imran and Deborah Okpanachi instituted the suit before a Federal high court sitting in Lagos praying the court to declare the retention of Service Chiefs by President Muhammed Buhari as illegal and unlawful.

In an affidavit in support of the suit deposed to by Imran Abdul Ganeey, it was averted that the Chief of Defense Staff, Major – General Abayomi Gabriel Olonishakin, graduated from the NDA as a member of the 25th regular combatant course in 1981, as at 2015 when he was appointed, he was already, 34 years in service and that he spent 39 years in service.

According to Abdul Ganeey, the Chief of Army Staff – Major General Yusuf Buratai has spent 37 years in service having been commissioned as a second lieutenant in 1983 while the Chief of Air Force – Air Vice Marshal Sadique Abubakar Joined the Nigeria Air Force early as a member of cadet military training course (CMTC 5) in November 1979.

He further stated that the Chief of Naval Staff – Real Admiral Ibok – Ete Ekwas Ibas has also spent more than 37 years in service, contending that the naval chief was a member of the NDA’s 26 regular course and was commissioned sub-lieutenant of the navy in January 1983.

The applicant stated that from the facts it presented to the court, “it is obviously cleared that the Services Chiefs have spent more than 35 years in services and some of them have also attained the age of 60.”

Although the matter has been assigned to Justice Muslim Hassan, no date has been fixed for hearing of the suit.