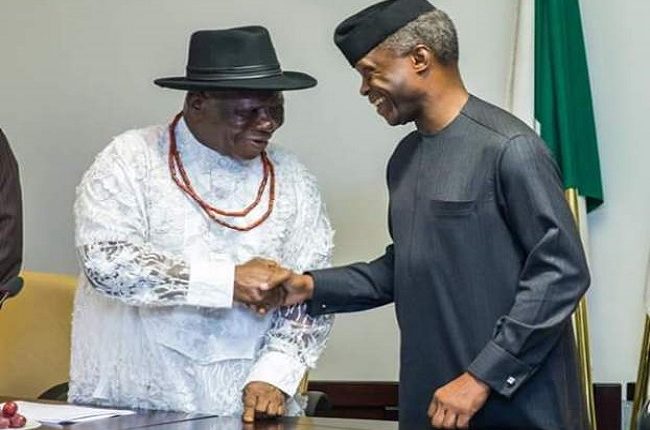 The elder statesman warned that people of the squalid region were prepared to take their destiny in their own hands not minding the consequences of the perennial agitations over critical issues affecting the region were not addressed.

Clark gave the warning in a lengthy letter he personally signed and addressed to Prof Osinbajo, copies of which were electronically made available to journalists on Tuesday,

The nonagenarian is upset over a closed-door meeting VP Osinbajo held a few days ago at the State House, Abuja, with the duo of Minister of State for Petroleum, Chief Timipre Sylva and the Deputy Governor of Delta State, Mr Kingsley Otuaro, over renewed agitations in the Niger Delta region without involving aggrieved stakeholders.

The former Minister of Information referenced “the recent developments in Delta State; where some Communities and groups i.e. Ijaws of Gbaramatu and Ogulagha, Itsekiris, Urhobos, Ukwanis, Isokos, etc. issued ultimatums and threats to disrupt oil and gas operations in their areas, due to Federal Government’s continued apathetic attitude towards the region.”

According to him, “I have been inundated with countless calls since the news of that supposed meeting from various quarters, including the media, and many have expressed serious exception to the fact that critical stakeholders of the region were not consulted or involved.

“The action, whatever the intentions were, is not only thoughtless but is also a betrayal of trust, to say the least, and likely to stir up unnecessary tension in the region.

“This again shows the creepy attitude of this administration, and its practice of exclusion, and non-committal to issues of the Niger Delta.

“It is sad that this government has continued to behave in this manner, and sadly, with the support of some of our people.

“Unfortunately, in spite of the gains arising from the subsisting peace in the region, and the conciliatory gesture of the Niger Delta people, the Federal Government has continued to demonstrate indifference to issues affecting the Niger Delta region.”

He flayed the Federal Government for reneging on its promise to attend to the 16-point demands presented by the Pan Niger Delta Forum (PANDEF) in the wake of hostilities against oil and gas assets by militants in 2016.

Clark warned that if the recent agitations by the Ijaws of Gbaramatu, Ijaws of Ogulagha, the Itsekiris, the Urhobos and other ethnic nationalities in Delta State over the abandonment of the Export Processing Zone (EPZ)/Gas Revolution Industrial Park Project at Ogidigben and other abandoned projects, could cause a spike in agitations.

“An issue that easily comes to mind is this administration’s abandonment of the Export Processing Zone (EPZ)/Gas Revolution Industrial Park Project at Ogidigben in Itsekiri and Gbaramatu in Ijaw, in favour of the building of AKK Gas Pipeline in Ajaokuta to Abuja, Kaduna and Kano for about 2.8 Billion Dollars. Sadly the name of the project, AKK Gas Pipeline, even ignores the name of Escravos from where the gas and the pipeline starts.

“This is very unfortunate; I consider it part of the deliberate attempts to undermine the efforts of the people of the region and the leadership of PANDEF. It is capable of causing disaffection and unnecessary tension in the region.

“The Minister of State Petroleum, Chief Timipre Sylva, in fairness to him, was not part of our past conversations on some of these issues, so he may not be blamed for this new action.

Niger Delta Leaders are particularly disappointed at the steps being taken by the Vice President of Nigeria and the impact it may have on impending crisis in the Niger Delta six coastal States,” he enthused.

While decrying the parlous state of communities in the region, Chief Clark advised Vice President Osinbajo to “take heed over these secret meetings, in which you want to isolate our leaders. We would have thought that your greater concern should be after how to put into action your various promises, most of which are not being implemented.

“Let me make it clear that we are prepared to take our destiny in our own hands, no matter the consequence that will follow suit. Enough is Enough.”

Court sentences 2 labourers to 4 years imprisonment each for stealing