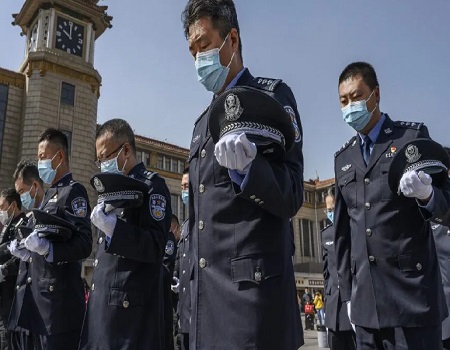 China owes Britain £351billion in coronavirus compensation and the government should pursue it through the international courts, a study has concluded, TheSun Newspaper reports.

An investigation into the crisis has claimed the horrific impacts of coronavirus could have been mitigated if China had just been more honest about the outbreak.

It also argues there are ten legal avenues major nations – such as Britain – could take to pursue damages from Beijing.

Experts calculated the G7, the world’s leading economies, face a bill of £3.2trillion.

And they said this could have been avoided if the Communist Party was more open about coronavirus, reports The Mail on Sunday.

Britain’s slice of the compensation would be used to cover the full costs of the treasury’s economic bailout plan and the hike in NHS spending to manage the crisis.

World governments have been forced to inject huge sums of cash into their economies to keep them going, helping to prop up businesses and support laid off or furloughed workers.

It comes as British ministers are now reportedly not discounting the theory that coronavirus actually came from a leak from a Chinese lab in Wuhan.

And meanwhile, the report has spurred a group of 15 top Tories to call on Prime Minister Boris Johnson to “rethink and reset” the United Kingdom’s relationship with China.

In a joint letter, the four former Cabinet ministers and 11 MPs said they are worried about the “damage to the rules-based system caused by China’s non-compliance with international treaties.”

HJS experts say key decisions in the early days of the outbreak, such as not cancelling flights from London to Wuhan, were directly skewed by misinformation from China.

The report reads: “The truth is that China is responsible for COVID-19 – and if legal claims were brought against Beijing they could amount to trillions of pounds.”

Britain could bring a case against China at the Permanent Court of Arbitration at The Hague against China for breaking sanitary commitments, or it could be got to the UN and International Court of Justice, or bring it up with the World Trade Organisation

In their letter to the PM, the 15 Tories, led by former deputy PM Damian Green, write: “Legally binding international healthcare regulations require states to provide full information on all potential pandemics. It appears likely that in its early response to the outbreak, the uphold its obligations.

“This omission allowed the disease to spread throughout the world with extraordinarily serious consequences in terms of global health and the economy.

“The cost to the UK maybe, as a Henry Jackson Society report now suggests, over £350 billion.”

China has been openly accused of concealing details of the outbreak in its early stages, such as the death toll and spread of the virus.

British government officials met on January 13 and concluded the risk to the population was “very low”.

This was based on information from China, who claimed there was no significant “human to human transmission” and no evidence of medics getting the disease.

Advice based on Chinese data continued to be used throughout January, and then one day before the end of the month coronavirus reached the UK.

From then the number of infections has skyrocketed, with Britain suffering its deadliest day yesterday as 708 were confirmed dead – raising the total to 4,353.

More than 41,000 people have now been infected, Britain is on total lockdown, and heroic healthcare workers are giving their lives to fight coronavirus.

HJS experts argue this could have been avoided if China had just fessed up and come clean.

COVID-19: Fast and furious, now is the time to act