CBN-EDC and need to sustain enterprise development for economic diversification 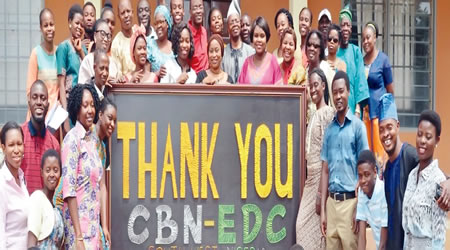 The narratives of students who have attended the Central Bank of Nigeria Entrepreneurship Development Centre (CBN-EDC) Southwest in Ibadan were of delight and gratitude over an eye-opening exposé on what entrepreneurship really entails. PAUL OMOROGBE presents their views, the impact of the centre, and the importance of sustaining this enterprise development drive.

Benson Adewale Oluwaseyi, was still an undergraduate student of the University of Ibadan, while undergoing entrepreneurship training at the Central Bank of Nigeria Entrepreneurship Development Centre (CBN-EDC) Southwest in Ibadan. According to him, “It is beyond professionalism if you want to start a business. I am a professional at what I do, but how to apply professionalism to business is what I have learnt. I am yet to start my own business, although I have been working for others. Here, I learnt that starting a business is a different ball game from working for others.

“How to write a Business plan, work etiquette, staff management, time management are among the many things I have learnt here. I have begun applying things I learnt and they have been working.”

Ijeoma Vincent has been an entrepreneur since 2007. She said she got to know about the training through a family member. “I thought I was doing business very well until I came here. During the training, I discovered I had been doing business informally, and I decided to start doing it formally. A lot of awakening has come through the training. I didn’t keep records. Now I have bought the books for it, and have started keeping records. I am ready to re-fire now,” she said.

“I got to know about EDC through my aunt. I came with very low expectations. But I was dazed after the first class I attended that dealt with mindset, my mindset was renewed and I was energised to keep coming. And I have not missed a class since then. With the information and training I have gotten from here I have the boldness to go into business,” Fidara Akanmu, a fresh graduate said.

Mr Akeredolu Martins said he had worked for an international organisation and had been in business for several years. His solar business and others crashed for lack of knowledge. He said, “Before coming here, I planned to go to a business school in Netherlands, but I thank God for coming here to EDC. There has been so much knowledge gained. It is one thing to have money, it is another thing to know how to manage the business. I have applied the knowledge I gained here and it has helped my organisation a lot. If a place like this had been around in the 80s, Nigeria would have been ahead of countries like Singapore and Indonesia.”

These are the narratives of people who have enrolled for the CBN-EDC Entrepreneurship Development Programme. The surprise of many is that this business school kind of training costs just N5000.

How the centre operates

Mr Olufemi Adebiyi, the Training and BDS Manager spoke a bit on the operations of the centre. His job is to train and support but those currently doing businesses and those yet to start, be they graduates or non-graduates with Secondary school certificates. “We have trained people who are PhD holders. It is about entrepreneurship training not about academic achievement. Our focus is economic entrepreneurs. We are a product of three bodies: Central Bank which is the originator and financier; the Oyo State Government which is the hosting state on behalf of the Southwest states, and the Africa Leadership Forum (ALF), the implementing agency for the project. We (ALF) have been working on this project for CBN since 2008.

He, however, added that “as I speak to you there are five other centres: one per geopolitical zone. We came into Ibadan and started operating here in 2015.”

Mr Adebiyi said the centre had three major windows of activity: training in classroom and on the field, not lecturer-student but interactive in nature; internship; and business development services to nurture student’s start-ups. “When people have started their businesses, we visit them on the field to see if there is anything they are not doing well that we can support. The BDS relationship could last up to 18 months,” he noted.

He said the training at the centre which lasts for six weeks covers the following areas: leadership, business management, core entrepreneurship and financial management. “At the end of the training we expect that each of our students would have learnt and prepared a business plan for their business.”

Mr Adebiyi said training was not at the Ibadan centre alone, but that training outreaches had been carried out in other cities in the Southwest in Ogun, Osun, Ekiti, and Lagos. He said, “Our outreaches could be to NGOs, faith-based organisations or governments.”

Vocational skills training also takes place at the centre. The centre also has a tech hub and an incubation centre where students can use to start and have their businesses nurtured.

“We are changing the face of business in the Southwest,” Dr Olumide Ajayi, the head of CBN-EDC Southwest and Executive Director of African Leadership Forum (ALF).“Ibadan, being the capital of the Southwest is already feeling our impact because we are changing the ecosystem, we are changing the knowledge-base, we are giving new skills to people who are creating enterprises and are creating jobs. We are lifting the economy out of depression using entrepreneurship development. We are training young people to see entrepreneurship as a way of life, not looking for jobs but creating jobs.”

Explaining further the centre’s impact, he told Nigerian Tribune that, “I am happy to say that in the last nine years we have been doing this, we have created almost 6,000 jobs. We have created 320 enterprises; we have facilitated almost half a billion naira worth of loans to these individuals we have trained. We have expanded almost 5,000 existing businesses. We have trained up to 22,000 entrepreneurs. What this economy needs, and what the government needs to promote and focus on is enterprise development with focus on the youth. This is exactly what we are doing here, and this has to be sustained over many years for Nigeria to fully diversify our economy and engage our youth.

“One of the things we have introduced recently is ‘agro-preneurship’ training. This we have deployed mostly in Ekiti State, where we take young people, give them both entrepreneurial and technical training in the field of agriculture, with the purpose of these young people becoming agricultural service providers.”

Speaking again on how to sustain the impact, Dr Ajayi said, “Sustainability lies with the CBN and the state government that is hosting this. CBN has been able to fund this project for the last nine years, and we will like them to continue. The issue is that other stakeholders must bring something onboard. Oyo State government gave us this place on behalf of the Southwest region, but there are other needs of the centre that will ensure sustainability. The fees we charge are subsidised prices not economic prices. But we want this to continue in order to lift people out of poverty. If there are jobs, there will not be agitation, kidnapping or yahoo-yahoo. The crime and insecurity situation Nigeria has can be plugged when you empower a centre like this to create jobs and train more people.”